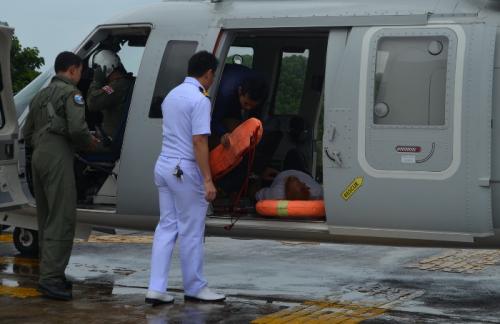 PHUKET: One more crew member from a foundering Bangladeshi cargo ship was rescued this afternoon when a Royal Thai Navy helicopter spotted him in a life raft, plucked him up from the broiling sea and flew him to safety.

“Adubagar Siddiue, 40, was in a life raft not far from the MV Hope,” said Rear Admiral Prayuth Phutien of the Phuket-based Third Naval Area Command.

“He is currently receiving treatment at Vachira Phuket Hospital. He is scratched and weak because he was at sea for hours,” he said.

The MV Hope, en route from Penang to Chittagong in Bangladesh, started taking on water in high seas just after midnight (story here).

The crew sent out an Inmarsat distress signal and abandoned ship.

The Royal Thai Navy subsequently dispatched two ships to search for survivors and when a break in the weather finally allowed, two helicopters.

Five crewmen were picked up by another Bangladeshi cargo ship that was in the area and are en route to Bangladesh.

“Eleven people are still missing,” said R/Adm Prayuth, confirming that 17 people were on board the MV Hope when it was overpowered by the heavy seas.

“The weather conditions are not making it easy, but we are continuing to search for them. If we don’t find them today, we’ll start again tomorrow morning,” he said.