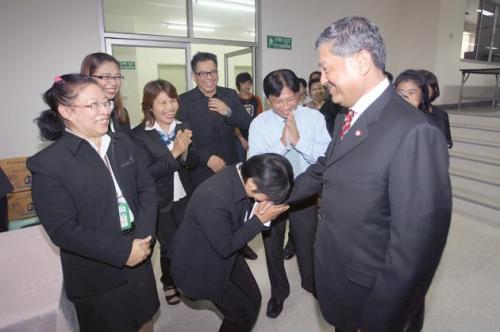 PHUKET: A disaffected Labour Minister Chalerm Yoobamrung yesterday warned Prime Minister Yingluck Shinawatra that she was setting her government up for an early demise thanks to her new “ice-cream gang”.

After reporting for work at the Labour Ministry for the first time since the Cabinet reshuffle, Chalerm spent more than an hour complaining about his transfer. He previously held the post of deputy prime minister.

After briefly addressing senior Labour Ministry officials, Chalerm said he was sorry about being removed from his previous position because he was doing so well in fighting drug trafficking.

“I have the right to ask why I was transferred when I had always performed well,” he said.

Chalerm went on to say that his sarcastic comment about being former PM Thaksin Shinawatra’s slave was only meant to have a dig at the opposition Democrat Party. He said Yingluck had invited him to meet Thaksin in London in 2006, where he was asked to join the People Power Party.

After that he was put at the helm of the Interior Ministry for eight months until the so-called “gang of four” took over and started influencing the Cabinet. In this case he was referring to former PM Samak Sundarvej, Thirapol Noprumpha, Newin Chidchob and People Power Party secretary-general Surapong Suebwonglee, who apparently tried to wrest power from Thaksin.

“And now there’s an ‘ice-cream gang’ at Government House,” he said.

Chalerm added that Yingluck should have veteran politicians around her so she can be shielded from political attacks.

“Now, she has only dogs around her and she will face her demise as prime minister as nobody will respect her,” he said.

He went on to say that measures to control the southern unrest had failed partially because he had only taken over the responsibility in November and had not been given enough power or funds.

He also attacked Thawee Sodsong, secretary-general of the Southern Border Provinces Administration Centre, for ignoring his demand that he publicly announce that Chalerm had evidence proving that the Barisan Revolusi Nasional was behind the May 1 attack.

Six civilians were killed in the attack, and foreign media have been blaming Thai soldiers for it.

He also claimed that Thawee and the “ice-cream gang” had told Yingluck about his inability to ease the situation in the South, which is why she chose not to give him the task to oversee national security.

PHUKET: The government yesterday vowed to go ahead with the enactment of the Bt2-trillion loan bill, rejecting a legal-reform panel’s claim that the bill is unconstitutional.

Deputy Prime Minister Phongthep Thepkanjana said the bill does not violate Article 169 of the Constitution as claimed on Wednesday by the Law Reform Commission of Thailand (LRCT) headed by former attorney-general Kanit na Nakorn.

“The bill does not violate the charter because the loans will not be state funds,” Phongthep said. “Moreover, similar borrowing has been done by several governments – the Bt2-trillion bill will not be the first of its kind.”

On Wednesday, Kanit told a press conference that the bill would definitely violate Article 169, which requires that state funds be disbursed in line with budgetary procedures. He reasoned that the Finance Ministry is a state agency and any loans it obtained should be regarded as state funds.

Kanit also warned that the bill would violate the people’s rights, because parliamentarians, who represent the people, will not be allowed to monitor the spending on the transport-infrastructure projects for seven years.

The bill would empower the Finance Ministry to borrow Bt2 trillion, which would be off the budget, to implement transport infrastructure projects. Phongthep said it was not true that Parliament would not be able to monitor the spending.

“The legislative branch can ask questions or raise recommendations or submit motions to the government to answer. The opposition can even hold a no-confidence debate against the government regarding the spending,” Phongthep said.

The deputy prime minister added that while the bill is being deliberated by the House of Representatives, it will already have been checked by the legislative branch.

“Although the coalition has a majority of MPs, there are also opposition MPs. The bill will also be checked by the Senate, and the government has no senators. So, the bill will be checked before the government will obtain the loans. The legislative branch will still be able to monitor it after the loans have been obtained,” Phongthep said.

The bill has passed its first reading and is being vetted by a special House committee.

Chief coalition whip Udomdet Ratanasathien, a Pheu Thai MP from Nonthaburi, said the opinion of the LRCT would have no impact on the vetting of the bill, which is almost complete. But Udomdet said the government should heed the warning of the commission, which was set up by the government.

“I think the government should ponder and reach a decision on the opinion of the LRCT before the bill is sent back to the House for the second reading in about a month,” Udomdet said.

Sanguan Pongmanee, a Pheu Thai MP from Lamphun, said the panel could only suggest legal reforms; it did not have the authority to change or improve the laws, which rested with Parliament.

While the LRCT was within its rights to comment on the constitutionality of the Bt2-trillion bill, it had no place evaluating whether the investments were worthwhile, the MP said.

Meanwhile, the so-called Group of 40 senators threatened to submit a petition to the Constitutional Court against the government if the Bt2-trillion bill clears Parliament.

PHUKET: The Public Health Ministry is seeking legal action to control the illegal import of liquid nicotine in the form of shisha sticks, known locally as “baraku”, which seem to be very popular among celebrities.

It is believed the fancy cigarettes have several addictive substances.

Dr Nopporn Cheanklin, deputy chief of the Disease Control Department (DCD), said his agency had asked the Food and Drug Administration (FDA) to list liquid nicotine as a controlled product under the Psychotropic Substances Act, which requires importers to first register it with the FDA before selling in the market.

“This way we will know the number of importers and the amount of imported liquid nicotine that will be sold in the market,” he said.

He was speaking at the national academic conference entitled “Tricky Marketing and Promotion of Tobacco Companies” hosted by the Tobacco Control Research and Knowledge Management Centre.

Since the electronic shisha sticks ar