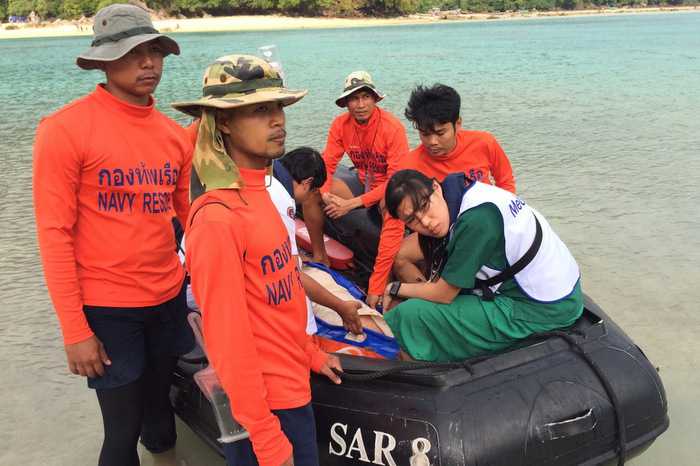 PHUKET: An official is under observation at Bangkok Hospital Phuket after a Navy medivac helicopter returned him from the Surin Islands yesterday.

Amnuay Komonthee, a skills development officer from Phang Nga, suffered spinal injuries in a fall while riding in a speedboat that was en route to a sea gypsy village in the islands.

A local team of Navy medical officers stationed at Surin Islands National Park were called in, but when they realized that Mr Amnuay had suffered a concussion and was unable to move, they called for backup.

“The speedboat in which Mr Amnuay was travelling encountered increasingly larger waves, which bumped him out of his seat and onto the floor, which hurt his back,” explained Gp Capt Pongchak.

Doctors have confirmed that Mr Amnuay’s injuries are not critical.

“I was told that my first and second vertebrae were displaced, but nothing is broken,” Mr Amnuay told the Phuket Gazette from his hospital bed today.

“However, I have to stay in hospital for about a week for physical therapy. My back still hurts.”