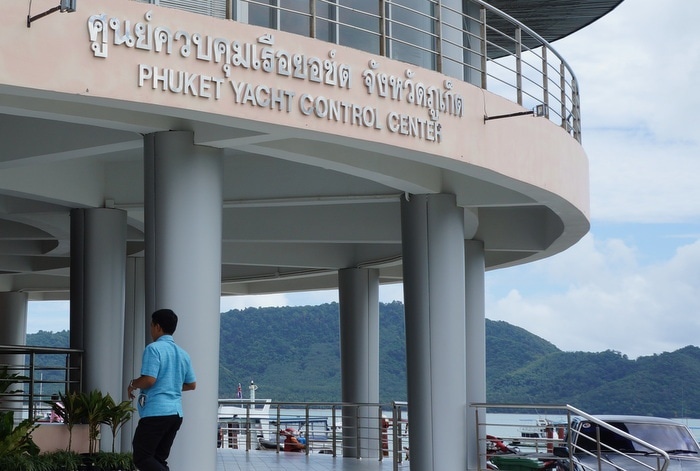 PHUKET: The Phuket Marine Office has vowed to toughen its stance on foreign yachts needing to install Automatic Identification System (AIS) devices and report to the Phuket Yacht Control Center when arriving and departing the region.

In September last year, Phuket Marine Office Chief Phuripat Theerakulpisut told the boating community that all foreign yachts in Phuket had to be fitted with AIS devices by October 1 or face six months in jail (story here). However, he recently admitted that his officers had been ‘soft’ and flexible with foreign-vessel owners with regard to the new regulations.

Part of the official order released in [poor] English on Monday read: Marine Office Phuket Branch would like to emphasize that all foreign boats that enter and leave Phuket province’s port[s], which are cruise[ing], yacht[ing] and [sic] sailing yacht have to:

2. Bring the vessels to Chalong Bay for checking your chip position with the Vessel Traffic Monitoring System (VTMS) before moving to marina, anchoring or leaving Thai waters

“We did not really enforce the regulations strictly because we were also installing the VTMS system at the time,” Mr Phuripat told the Phuket Gazette. “And to be honest, I expected foreigners to willingly comply.”

However, many foreign-vessel owners continue to tell officers that they were unaware that they need to install the devices, Mr Phuripat claims.

“They must now comply or face the consequences of not following the rules and regulations of the Kingdom of Thailand,” he said.

The use of AIS receivers is a standard safety procedure in many places around the world, as they advise skippers of small craft of the location, direction and speed of larger vessels that are restricted in their ability to maneuver.

Regarding the report that vessels must have the AIS ‘on at all times’, Mr Phuripat clarified that this was only while the vessel was in motion.

“We are pushing this for safety. Foreign vessels must install an AIS Class B or higher system. This way, we will be able to tell where larger vessels are and possibly be able to determine who caused an accident,” said Mr Phuripat. “If your vessel breaks down and you need help, we can easily find you if you have your AIS receiver on. So instead of searching by air or ship, which is expensive, we can quickly begin a rescue.”