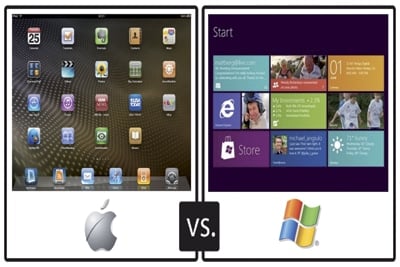 PHUKET: August is usually a rather dull month for the computer industry. This August started out with an enormous amount of activity, but as the days wane, so does the news. All eyes at this point are fixed on the coming Christmas season. And it looks like Christmas this year will be very interesting indeed.

Microsoft has already released its latest operating system, Windows 8, to people who
subscribe to their developer’s network. Win8 is also available to large companies through certain kinds of volume licensing deals. As you may know, I’ve been working with test copies of Windows 8 for almost a year, and writing furiously about it since.

In my March 23 Live Wire column I didn’t give it a ringing endorsement, particularly for people in Phuket, because of its Dr Jekyl/Mr Hyde interface. Back then, writing about the consumer preview version of Windows 8, I said, “I’ve come to several conclusions: First, you probably won’t like it. Second, you probably won’t like it at all. Third, if you take a lot of time to learn how to use it, you might warm up to it a little bit, but probably not much.”

Fast forward five months, I’ve been working with the final (“Release to Manufacturing” or RTM) version, and Windows 8 still has many of the same problems I talked about in that Live Wire column. My InfoWorld review last week, “Windows 8 Review: Yes, it’s that bad,” drew a lot of raised eyebrows and more than a few comments. If you want to see the details, check out the post at infoworld.com.

Don’t get me wrong. Windows 8 is a great product, in the right situation. But many of the people in Phuket won’t be buying new touch tablets any time soon, and Win8 is kind of in a neither-fish-nor-foul position for those of us still wed to the keyboard.

The place Windows 8 will shine is on new tablets or flip-over convertibles, where people want to run with a tiled interface some of the time, and hop over to the “real” Windows the rest of the time.

I’ve been using Windows 8 on a touch-sensitive tablet for many months now, and I could see the appeal for someone who wants iPad style ease of use some of the time, but also wants to switch to the full Windows we all know and love, as needs dictate.

The problem, of course, is that full-fledged Windows 8 tablets, at least in the near term, are going to be big, heavy, noisy (with a near-obligatory fan), probably expensive – and they’ll have a battery life that’s much shorter than an iPad’s.

But that’s only part of the story. Windows 8 also has a touch-first version called Windows RT that may well take the world by storm. It’s still much too early to tell – reviewers have only had a chance to spend a few minutes with working machines – but the idea is, simply, to take on the iPad. Windows RT looks like a mobile phone or tablet operating system, with flashing tiles and an emphasis on gorgeous photos and many re-imagined pieces. There are even fantastic new Windows RT versions of Minesweeper and Solitaire. I kid you not.

Stealing a page – no, a couple of chapters – from Apple’s playbook, Microsoft is also getting into the hardware business. Windows RT tablets made and sold by Microsoft, called Windows RT Surface tablets, will go on sale October 26. Full Windows 8 Surface tablets are due early next year. We still don’t know how much they’ll cost, but the specs are impressive, and they’re certain to put Microsoft somewhere in the tablet market. Just where is anybody’s guess.

More than that, Microsoft is rolling out Microsoft Stores, in many cases literally across the street from Apple Stores, all over the US. I’ve heard a lot of jokes about empty Microsoft Stores next to packed Apple Stores, but at least Microsoft’s making some sort of effort. Their fortunes may change in November, when the Surface tablets hit.

The sincerest form of flattery, eh?

Sometime between now and the holidays – more likely sooner rather than later – Apple is due to come out with new and different products. Now the largest publicly held company in the world – ever, in human history – Apple’s meteoric rise seems destined to continue, at least for the foreseeable future.

Why? Great products, of course.

So far this year we’ve seen the Retina Display – a revolutionary monitor that you simply have to see to believe – on the latest iPad 2 tablets and on one particular MacBook Pro. No other display matches the Retina. Full stop.

Apple’s selling all they can make – and they’ve locked in all of the parts manufacturers to exclusive contracts that will keep the competition scrambling for years.

Apple has also released a new operating system, and re-jiggered some of its mainstream products. I expect we’ll see much, much more in the near future.

For example, it wouldn’t surprise me to see the Retina Display on more Apple products. And I’ll predict without any fear of error that new Retina Display computers will sell like hotcakes, even at elevated, nosebleed prices.

Rumors are all over the place about new MacBook Pros and MacBook Airs.

Time will tell, but it’s likely Apple will bolster the product lines before the holiday season.

Of course, the products everyone’s waiting for are the new iPad, iPhone, and possibly a new iTV. I’ll talk about those in Part two of this four part series next week.