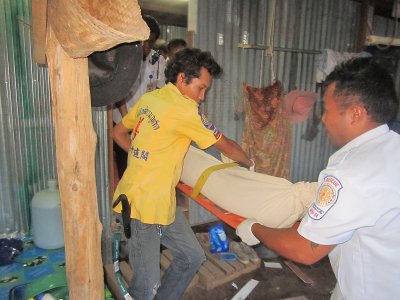 PHUKET: Colleagues of a female construction worker found hanged at a workers’ camp in Phuket early yesterday evening have no idea why she decided to take her own life.

Police were notified of the death at 5:45pm. Arriving at the camp with Phuket Kusoldharm Foundation workers, they found the body of 30-year-old Nuanchan Donphon hanged by the neck in a unit of the makeshift row of flats.

A sign at the entrance to the camp, in the Tah Chat Chai area of Mai Khao subdistrict, indicated it was built to house workers employed by the Bangkok-based construction firm World Construction and Engineering Co Ltd.

Ms Nuanchan, a native of Pha Khao district in Loei Province, was found suspended by a rope noose tied to a wooden support beam in the flat. Her feet were still touching the floor when her body was discovered.

Fellow workers said they had no idea why Ms Nuanchan chose to take her own life because she had never confided any problems to them.

Workers from the Phuket Kusoldharm Foundation, Baan Kor En unit transported Ms Nuanchan’s body to Thalang Hospital, where it will be examined and stored until claimed by relatives.