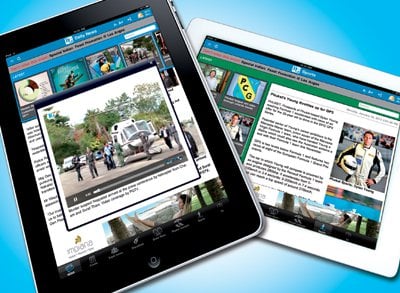 PHUKET: Continuing my series of articles answering questions that I hear most often… it seems like half the people I know have got an iPad recently.

The question I’m hearing over and over: What apps should I put on my iPad?

There’s no definitive answer because the iPad ecosystem changes faster than a Republican primary. At last count, you had more than 500,000 apps to choose from, and the number’s going up by more than 600 per day.

Why? Money. The iPad’s booming. Apple hasn’t officially reported its sales numbers for the last quarter of 2011 yet, but it looks like they sold about 40 million iPads in the calendar year 2011. Compare that to about 350 million PCs (including Macs) sold in 2011. iPad sales are increasing rapidly – up much more than 100 per cent between the fourth quarter of 2010 and 2011. PC sales are decreasing, especially in the US – down 5 per cent year-on-year.

While nobody’s saying the PC is going away anytime soon, it’s clear that the iPad has started to grunt like an emerging 800 lb gorilla.

If you have a new iPad, there’s a handful of apps you should have downloaded by now. To get any of these apps, turn on your iPad, and touch the button for the AppStore, then search for the app by name.

If you’re on Facebook, the Facebook app is a no-brainer: using the Facebook app on the iPad is much easier than using it on the web. Ditto for Twitter. Bloomberg has an excellent news app. Weather Channel. I swear by Flipboard. Skype works like a dream.

If you’re a Windows user, the iPad works great with Windows, in spite of what people may tell you. I wrote two articles about getting iPad and Windows to work together with various apps, at Windows Secrets Newsletter. Look it up: https://bit.ly/r2Hwob and https://bit.ly/nqblsO.

Those are the important apps for every iPad owner. Those of us who live in Phuket also have a handful of apps that work great. And they’re free.

To start this guide to Phuket apps, I went to the Apple AppStore and searched for “Phuket.” Not exactly rocket science.

I was surprised that I didn’t find the two apps that were mentioned earlier in the Gazette. “Checkin Good Deals” didn’t draw a hit in the AppStore search engine. When I searched for “Tiny Coffee” I found that app in the iPhone store, and most of it works: Static (non-zoomable) maps to all of the Tiny Coffee locations, and the full menu appears on-screen. I couldn’t get the History button to work.

The FM 91.5 app also appears in the iPhone section, not in the iPad section. The app gives a live broadcast from FM 91.5, as long as you don’t switch to a different app (that’s a limitation of the iPad’s iOS, not a problem with FM 91.5). You can use the app to Request a Song and send a message to the current DJ. Unfortunately, there’s no on-screen volume control. It’s a basic app, but a nice way to listen to local radio when you’re hangin’ with your ‘Pad.

I found a couple of additional apps that appear to be very much works-in-progress. I’ll refrain from commenting on those. There are also many apps of varying quality geared to tourists: maps, reviews, typical travel magazine stuff. They’re frequently expensive. Remember that the average AppStore App sells for US$1.98.

One very pleasant discovery was that the web site Thaivisa.com has recently released two free apps – one for iPad and one for Android – and the iPad app (the one I tested) works very well. Thaivisa.com, for those who don’t know, is a remarkable source of information for foreigners living in, or visiting, Thailand. It covers visas in spades, as you would expect from the name, but thousands of posts touch on every facet of farang life. An entire forum is devoted to Phuket, another to Farang Food, another to Sports – you get the idea.

The Thaivisa iPad app is now my favorite way to look at the forums. It’s very well organized, absolutely no clutter, and as fast as can be. Unfortunately, it falls down in three places: you can’t post anything using the iPad app (the option to “Open in Safari” doesn’t work, at least on my iPad), there’s no Search capability, and you can’t use the pinch gesture to make type larger and smaller. Still, it’s an excellent app to catch up on the latest at Thaivisa.

Which brings me to my favorite local iPad app. Yes, I’m biased, but if you take a look at what’s on offer, I bet you agree. The Phuket Gazette’s app is a remarkable achievement – there are huge news organizations that don’t even come close with their iPad apps. Picture-toting tiles on the left give you quick access to the latest stories. The charm bar at the bottom has links to the Events Calendar, Issues and Answers (re-named “Expat Issues”), Classifieds, Queer News, the Lifestyle section, Sports and PGTV. Controls for resizing fonts, and sending links via e-mail, Facebook or Twitter are immediately available.

I know that many of you are thinking about coming up with your own iPad apps – I’m thinking about doing one for the Sandwich Shoppes – so I kicked around the Gazette office and asked about the details. I was surprised to find that the app was designed and built right here in Phuket. The Gazette IT Manager Seubsak (“Big”) Sahaworapun led the team.

Khun Big’s observation: “To create an App, you first need to purchase a MacBook computer and an iPad (or iPhone). You need to learn Objective-C, one of the most sophisticated object-oriented programming languages; Cocoa, Apple’s native object-oriented Application Programming Interface (API); and Xcode, a development software that integrates everything needed to compile and upload the finished product to the App Store.” One of the team members spent a week in Bangkok at an Apple briefing. The result speaks for itself.

The Phuket Gazette launched the first version of its iPad app last March. Version 1.0 tried to mimic the Gazette web site, and didn’t work very well: as iOS designers have learned over and over again, if you’re just going to copy your web site, it’s much easier to have your readers use a browser, and let them futz with scrolling and pinching. iPad apps – at least, good iPad apps – are different. They’re far more immersive, and the touch interface melds in with the content.

Version 1.0 took two programmers – working about half-time – a full year, plus a graphic artist and lots of edit time. Coming up with a good iPad app is not for the faint of heart.

The Gazette app currently in the AppStore is version 1.2, and it’s come a long way, baby, with a revamped design and full video – which posed a significant technical challenge. Give it a try.