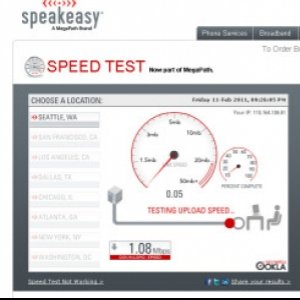 PHUKET: International internet speeds in Phuket this week were generally excellent for 3BB, CAT and True, but bad-to-abysmal for TOT.

3BB customers are being upgraded, free, frequently without any notification before or after the upgrade.

TOT Fiber Optic was performing horribly – often half as fast as standard ADSL lines, at five times the price – but the speed has picked up in the past two days.

True’s “3G” (HSPA) in Kata was blazing fast, then slowed down a bit, but 3G is still not available in most of Phuket.

Lots of news about 3G in Bangkok: TOT expansion has stalled; CAT expansion is under scrutiny from many quarters.

For the latest internet connection speeds in Phuket, as tested by real Phuket users, see phuketinternetspeed.com.