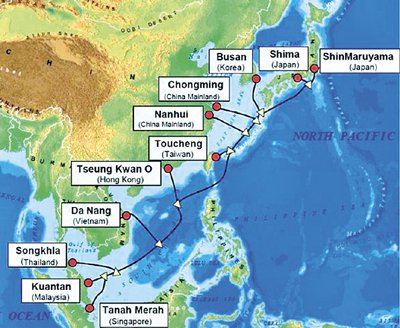 PHUKET: Investors are lined up, and ground is about to be broken on the Asia Pacific Gateway, the fastest, slickest submarine data cable ever constructed. And it’s coming to Thailand.

While most underwater data cables in the Pacific end up in the US, this one’s different. It starts in Malaysia, travels 10,400 kilometers (more than 6,000 miles) to Japan, and hits almost every major seaside country along the way – Singapore, Vietnam, Hong Kong, Taiwan, China, and Korea.

Oh, and it will also land just down the road from here in Songkhla. But it won’t go straight to the US.

Why the weird routing? Right now, almost every backbone connection between Asia and the US goes through Singapore or Japan.

If Singapore or Japan falls off the grid, or there’s a lot of contention at the switches in either country, all of Asia suffers.

By putting a very high speed line along the west side of the North Pacific, the investors figure they’ll be able to offer lightning fast routing inside Asia, and very quick re-routing if one of the major trans-Pacific lines has problems.

It’s also fair to say that the investors – who have put down a total of US$450 million so far – expect a huge increase in internet traffic inside Asia. Explosive growth.

With the addition of major server farms in Asia – Google, Akamai, Microsoft, Amazon, and many others – and a nearly exponential increase in Asian demand for social networking sites such as Facebook and China’s Renren, Sina Weibo and Tencent, there are a whole lot of bits flying. Consider that roughly 250 million people in China use social networking sites regularly.

Saturation in Asia is nowhere in sight.

How fast is the line? Total transfer speed is rated at just under 7 terabytes per second, which is one of the fastest cables ever laid. It’d take about 30 seconds to transmit the entire contents of the US Library of Congress over that line – or all of Wikipedia in one second.

If you used the line to stream music, you’d get about 120,000 hours of music per second.

If the routers and switches are all upgraded, using current technology, the line should be able to hit 100 TBps, almost 15 times faster than its initial configuration. That’s 1.8 million hours of audio recordings per second.

In a surprise move last week, Facebook announced that it had invested in the Asia Pacific Gateway project. As far as anyone knows, this is the first time Facebook has bought into a backbone cable.

Google’s been doing it for years, simultaneously increasing bandwidth for internet users all over the world, ensuring good connections for its own servers, and turning a healthy profit at the same time. But this is a first for Facebook.

Other major investors: China Telecom and China Unicom (two of the biggest phone companies in the world) China Mobile, LG Uplus, NTT Communications, StarHub, Vietnam Post & Telecom. That makes for a bit of a strained relationship, because Facebook is still banned in China.

The major contractor is Malaysia’s Time dotCom, which is the parent company of Global Transit. NEC is supplying most of the material and technology.

The APG has been in the planning stages for a long time; the investors first started talking in May, 2009. The main impediment to getting the agreement together: finding investors… and China. The APG didn’t get landing rights in China until last December.

I’ve looked all over the web, and can’t find any reference to Thailand’s plans for the Songkhla connection.

That line runs from Songkhla to Singapore and then Bataam. It has a capacity of 30 gigabits per second, which is just a tiny fraction of the amount of traffic the APG will carry. It’s my understanding that the TIS line in Songkhla feeds directly into the major switches in Bangrak. There’s no direct link to Phuket, or anywhere in the south.

Songkhla is also in the plans for the Southeast Asia Japan Cable, or SJC, a 10,700 km, 15 terabits per second underwater fiber cable running through Japan, China, Hong Kong, the Philippines, Brunei, Indonesia and Singapore. Google is a major investor in the SJC. Construction on the cable started in April 2011, and it’s planned to be onstream in the second half of 2013. (15 terabits is about one-quarter as fast as the APG’s 7 terabytes per second.)

I think it’s unlikely that we’ll get a direct link to the Songkhla APG or SJC connection points from Phuket.

We’ll no doubt have to contend with (and get throttled by) the internet service providers’ facilities in Bangrak. Even so, the additional bandwidth means that Thailand’s not going to run out of data pipes soon.

Current plans put the AGP online in the third quarter of 2014. The people behind the cable have a good track record, so it’s likely that we’ll have significantly more international capacity by the middle of 2013, and a whole lot more at the end of 2014 – as long as our internet service providers are willing to pay for access.