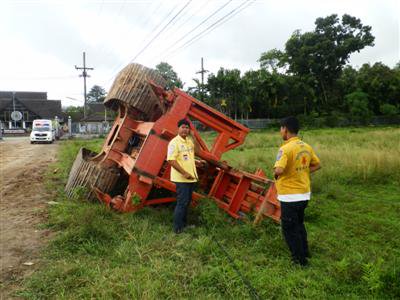 PHUKET: The operator of a pile-driving crane was crushed to death when the machine fell off its trailer in Phuket this morning.

Thalang Police were notified of the accident in front of the Thalang National Museum in Srisoonthorn at 9:25am today.

Kusoldharm Foundation rescue workers raced to the scene to find a man’s body pinned under the retractable boom of a crane belonging to the Chalong Concrete Co Ltd.

The victim, later identified as 42-year-old Anukun Wecharat, was a resident of Tai Muang District in Phang Nga.

Witnesses said Mr Anukun was in the operator’s compartment loading the crane onto a flatbed trailer when it began to topple. Afraid, he jumped out of the compartment into some thick grass by the side of the road, but was killed instantly when the machine fell off the flatbed onto him.

A 45-tonne crane was brought to the site and managed to lift the crane off the body of the late Mr Wecharat after about one hour.

Phuket Kusoldharm Foundation workers transported the body to Thalang Hospital, where it will be stored until it is claimed by relatives.

Phuket Live Wire: Faster and closer, but not for us