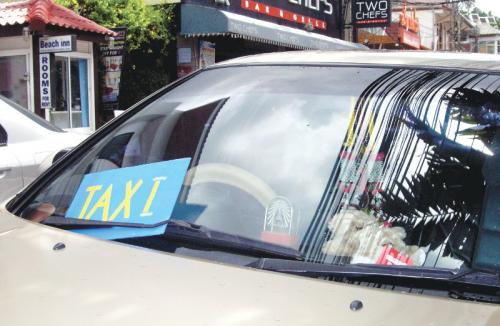 PHUKET: Imagine this headline: “Taxi driver returns money to customer; says she overpaid.” Impossible? It happened to me.

All the taxi news seems negative recently, what with high fares, delays in getting illegal drivers to register as legal, and metered cabs being pushed out of some markets (story here). The problem is apparently so bad that even the British Ambassador spoke up, and officials from Bangkok have come to Phuket to lend a hand (story here).

I thought I’d put in a plug for the good taxi guys out there; they do exist, I’ve met them. But most especially, I want to praise the motorbike taxi drivers who I’ve ridden with during the years I’ve lived in Phuket.

Sure, they’re not all perfect – I’ve had some steep fare requests from drivers near Central Festival, and there was the older gentleman who slowed down the trip because he had to cuss out everyone on the road; there was also guy who drove off with my stuff in his basket. But they are not all heinous. In fact, I’d say most of my experiences have been positive.

In the interest of balance, here are a few good stories about motorcycle taxi drivers.

One driver who posts himself at the Ocean shopping mall in downtown Phuket Town took me to Chalong once. I pride myself on knowing most fares, so I didn’t discuss it with him when we arrived, just handed over the money. I must have seen something in his eyes, because I decided to double-check it later, and found I’d underpaid him. Later, when I saw him in front of Ocean, I offered him the difference. He smiled and refused it.

Another time a driver took me quite a distance from Phuket Town. Once again, I paid him what I thought was the appropriate price. He handed some of the money back, saying it was too much.

The last case is about the guy who drove off with my stuff. That’s only half the story. He had picked me up at the downtown market, where I’d bought several kilos of fruit. I put my mangoes in his basket and held on to the rest. When we arrived at the hotel where I was staying, I asked him if the fare was 30 baht, which I thought was reasonable for the five-minute ride. He said, “60 baht.” I got hot and told him that was way too high, gave him 40, and flounced inside. He drove off in a huff.

When I got to my room I found I’d left my 140 baht of mangoes in his basket. I was shaking my head when the phone rang. No one there. It rang again, the same thing. I decided to go downstairs to see what the problem was, and on the steps I ran into the taxi driver, coming up with my mangoes. All he said was, “I came back.” That might be the only time my hand has moved of its own accord to cover my heart.

I know that it’s the nature of the news media to tell us about problems, bad experiences, disasters and tragedies. It’s “Man bites dog”, not “Man pets dog.” But good things happen in our world too, and if we want our perspectives to be balanced – to be realistic, I’d even venture to say – we’d be wise to pause once in a while to remember this.