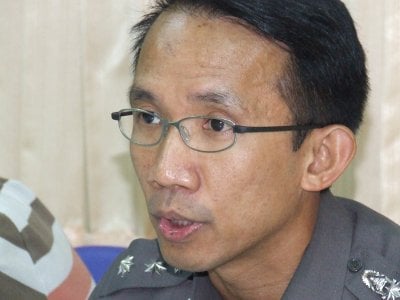 PHUKET: Phuket Immigration officers are scouring the island for fugitive Filipino brothers Mario Joel Tolentino Reyes and Mario Tolentino Reyes Jr, despite not yet receiving any formal request to apprehend the pair.

The news comes as Phuket Immigration Superintendent Panuwat Ruamrak told the Phuket Gazette this afternoon, “Even though we have yet to receive any formal requests, we are searching for the two.”

Col Panuwat confirmed that his office had yet to receive any requests from the Philippines embassy in Bangkok or authorities in Manila.

“We are thankful for the media for informing us of this. We will check our database,” Col Panuwat added.

The news follows Philippines Immigration Commissioner Ricardo David Jr announcing on Wednesday that his office believes that former Palawan Governor Joel Reyes is in Phuket, likely travelling under a false passport in the name of Joseph Lim Pe.

Mr Reyes may have even been in Phuket long enough to have needed to do a “visa run” to extend his stay. “As far as the Bureau of Immigration is concerned, he [Lim Pe] is in Phuket. He left once and went to Malaysia, but came back to Phuket,” Commissioner David was reported as saying.

Mr Reyes reportedly fled the Philippines to escape arrest in connection with the killing of broadcaster and environmentalist Gerardo Ortega.

Reyes and his brother Mario, former Mayor of Coron, have been in hiding since arrest warrants were issued against them for the killing of Ortega.

Gerardo Valeriano Ortega, better known simply as “Doc Gerry” or “Ka Gerry”, was a Filipino journalist, veterinarian, politician, environmental activist and community organizer was well known for his advocacy against mining on the island of Palawan.

He was shot and killed by gunman Marlon Recamata while shopping in a used-clothes store in Puerto Princesa City on January 24, 2011. Recamata later confessed that his gang was hired for the assassination for 150,000 pesos.

The Philippine National Police Criminal Investigation and Detection Group urges anyone who may have information of the whereabouts of the Reyes brothers to call their global hotlines listed here, or send them a Twitter message @CIDG_PIO.

The Phuket Immigration Office can be contacted at 076-221905 or by email at info@phuketimmigration.go.th

“He spoke well, looks fit and he wants to have one more hurrah.”