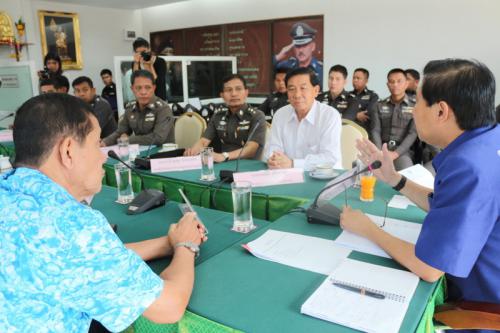 The governor is using the project to keep a close eye on police stations at three key tourism beach areas – Kathu (Patong), Kamala and Karon.

In October Governor Maitri was given a rundown of the Patong precinct and crime stats by Patong Police Superintendent Chiraphat Pochanaphan (story here).

Yesterday, it was Karon Police Superintendent Weerawat Jantarawichit’s turn to share some of last fiscal year’s results with the governor.

From October 2012 to September 2013 there were 20 complaints filed to the Karon Police Station by tourists, Col Weerawat said. Most of the complaints involved lost or damaged property.

“There were 54 cases in which tourists were suspects; most of those cases were concerning foreigners working illegally,” he said.

Col Weerawat assured Gov Maitri that he was doing everything in his power to prepare for the upcoming high season, which unofficially kicks off in Phuket tomorrow with the Patong Carnival (story here).

“We have set up the Kata-Karon Safety Zone campaign, which trains volunteers to help police protect tourists and their property,” he said.

Governor Maitri called on all members of the community to support police efforts to make Phuket a safer tourist destination.

“Ensuring public safety is not only the responsibility of the police, but also of local people, who are an important force in keeping an eye on suspicious or bad behavior in their community,” Governor Maitri said in October as part of his Visiting 3K Police Stations program.