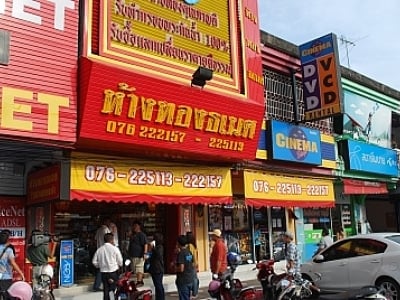 PHUKET: A man posing as a customer made off with almost one million baht in gold yesterday after snatching a display tray from a Phuket gold shop.

At the scene, they found a black helmet in front of the store and several frightened shopkeepers inside.

“I was at the counter with my sister and another worker when a guy, about 20 years old, came in wearing a black shirt and a cap,” said shopkeeper Puangpen Saelim.

“He pretended to look at the gold and we showed him some of what we have, but he said he didn’t like the pattern and walked away,” Ms Puangpen said.

“About a half-hour later, the same guy came back to our shop and asked to look at the same chain. Another employee took out the whole display tray to show him. That’s when he suddenly grabbed the tray and ran out of the shop, hopped on a motorbike where another person was waiting, and drove off,” she said.

“I ran out of the shop with the shop-owner’s sister and we saw two people drive toward the Kaset Market. They got away with 12 gold chains worth about 950,000 baht,” she said.

Police checked CCTV video footage and were able to get details of the thief and the motorbike’s license-plate number.

“I ordered police to set up a checkpoint in the area, but we couldn’t find the robber – we only found his motorbike in the parking lot of the Phuket Post Office,” said Col Chote.

In what appears to be a taunting gesture made by the robber, police found one gold chain hanging from the foot peg of the motorbike.

“We checked the license-plate number and found that it was a rental from a shop near the Pearl Hotel on Montri Road in Phuket Town,” Col Chote said.

The suspect was also spotted earlier in the afternoon “shopping” at Taweephon gold shop, about 500 meters away from Thong Tanet 1, but he did not steal anything there.

Thong Tanet 1 is the sister shop of Thong Tanet 2, which was robbed of 4mn baht worth of gold in June. The shop offered a 200,000-baht reward for information leading to the return of the stolen property, but to no avail. No arrests have been made in that case.