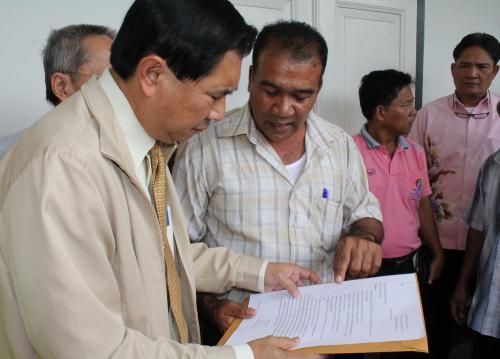 PHUKET: Governor Maitri Inthusut today ordered a task force to investigate claims by local residents in Pa Khlok, on Phuket’s central east coast, that public land had been encroached on.

The villagers, numbering about 50 and led by Baan Bangla village headman Samarn Bumroongna, arrived at Provincial Hall at 10am in protest.

Chief among their complaints was that someone who claimed to own the land had blocked a path to a small pier in the mangroves that the villagers have used for decades to access their longtail boats.

“About 100 households in our village are affected by this. For decades, our village has used this path to get to our boats so we can fish for a living,” Mr Samarn said.

“The land is public land, but the investors claim that the land belongs to them,” he added.

Blocking the villagers’ access to their boats is a fence and a sign saying, “Private Property”, Mr Samarn explained.

He added this was not the first time the villagers had to fight for their right to use the path.

“Ten years ago, private investors blocked our way to the pier. At that time, some of the villagers were sued for trespassing,” Mr Samarn said.

“The case was heard in court, but the judge ruled that it was public land,” he explained.

“We would like the governor to investigate whether or not the land has been issued a title,” he urged.

“Officers from the Land Department, the Royal Forest Department and other relevant departments will inspect the site tomorrow,” he assured.

“We will inspect the area and find out what should be done,” he said.

Satisfied with Governor Maitri’s assurances, the villagers disbanded their protest and headed home.

The officers are to inspect the area tomorrow at 1:30pm.