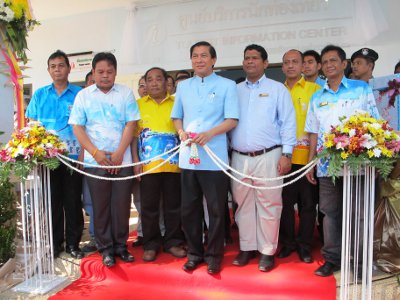 Cherng Talay OrBorTor President Ma-ann Samran told the Phuket Gazette that the decision to establish the center came in response to the increasing number of tourists visiting the area.

“Many more Thai and foreign tourists visit here now, so the new center at Surin Beach is there to provide them with information on local attractions, accommodation, transportation and other services,” he said.

“We have received a lot of help from local hotel managers, who have volunteered their staff to work alongside OrBorTor staff,” he added.

Governor Maitri added his thanks to all those involved in getting the center up and running, telling them that “the center will help promote tourism on the island and create a memorable impression on tourists”.

“The center is open 24 hours a day. Staff from the OrBorTor and hotels will be on duty from 8:30am to 4:30pm, after which personnel from the local rescue services will be at the center,” he said.