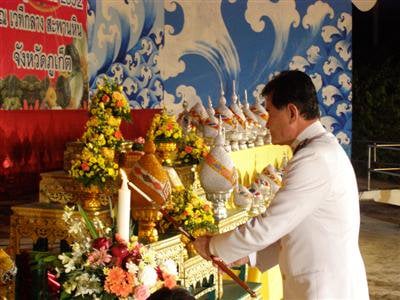 PHUKET CITY: Some of Phuket’s most important leaders and around 2,000 other well-wishers gathered at Saphan Hin last night to wish HM King Bhumibol Adulyadej a speedy recovery.

The event was held on the occasion of the Phuket Vegetarian Festival, which began at midnight Saturday with the arrival of the new moon starting the ninth month of the Chinese calendar year.

In attendance were Phuket Governor Wichai Phraisa-ngop, his wife Taisika Phraisa-ngop, Vice-Governor Smith Palawatvichai, Phuket Provincial Police Commander Pekad Tantipong, and the presidents of all of the island’s Chinese shrines.

The event began at 6:30pm with a songkaeng (Chinese prayer) ceremony led by a religious leader from Jui Tui Shrine.

Gov Wichai lit a candle on the stage and led the crowd in singing three songs for HM The King.

Fortunately, His Majesty the King’s general health is good and his fever is gone, the Royal Household Bureau said today.

“His Majesty can eat and sleep well,” the Palace said in its latest statement.

The King has been receiving treatment at Bangkok’s Siriraj Hospital since September 19.