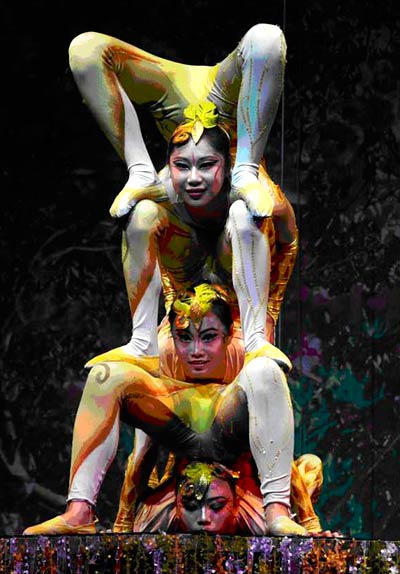 PHUKET CITY: About 1,000 people who patiently braved the elements at Saphan Hin last night were treated to a stunning performance by one of the world’s top acrobatics troupes.

The troupe, the 40-strong Beijing Acrobatics Fantasy, are in Phuket for two special performances coinciding with the annual Phuket Vegetarian Festival.

Last night’s show got underway well past the scheduled start time of 7pm. Some people holding 500 and 1,000-baht tickets were scalping them for less than half price.

As it turned out, just about anyone who wanted to watch the show for free could do so easily, as there was no physical barrier – save for a length of plastic rope – cordoning off the seating area.

Pakawat Wiratkiattikul of the Ubonrat Foundation that is sponsoring the tour to raise money for its charity projects said tonight’s performance would be at the Bangla Boxing Stadium near Jungceylon in Patong.

Tickets priced at 500 and 1,000 baht will be available to all, regardless of race or nationality, he confirmed.

[However, the Gazette has as yet been unable to independently confirm this from the stadium, which is known to charge foreigners more for entry than Thais.]

Another organizer, Khun Muoy, told the Gazette after last night’s performance that only about 25 of the troupe’s 40 acrobats were able to perform due to safety and time constraints.

“The show in Patong will be even longer and more beautiful,” she promised.

The show had to be stopped once in the early stages when it began to rain, which is particularly hazardous given the dangerous nature of the stunts the acrobats perform.

The costumes were breathtaking and the lighting and sound were very good, especially given the speed at which the entire stage and related equipment needed to be erected.

One audience member said, “I didn’t mind paying 500 baht to view such a world class performance live and up close, even if so many people did manage to sneak in.

“I would say the performance is on par with Cirque du Soleil, and that would cost much, much more… Anyway, it’s not only a once-in-a-lifetime opportunity but also a charity event, so the money is going to a good cause,” he said.

Those attending were allowed to take photographs, though flashes were forbidden as they would endanger the performers.

After entertaining crowds in Phuket the acrobats’ next stops will include Pattaya and other parts of Chonburi, Rayong and Isarn.