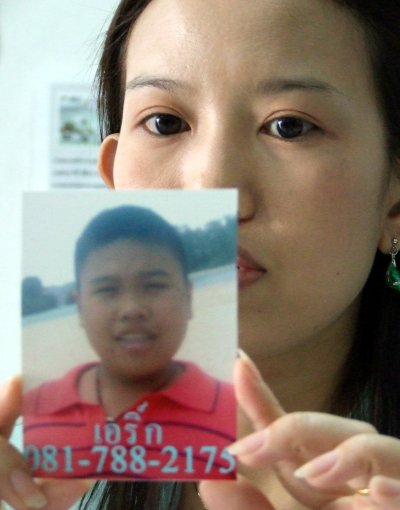 PHUKET: A runaway boy was safely reunited with his family yesterday after being spotted in Patong by a sharp-eyed Phuket Gazette reader.

The reader, a Malaysian-born US citizen named Shain from San Diego, contacted the Gazette by email this morning.

He spotted the boy, 13-year old Anuchit “Erk” Tan-a-pirom, selling fireworks by the side of the beach road in Patong.

Erk went missing from his grandfather’s home in Wichit on the morning of June 19.

For the original report of his disappearance and his aunt’s efforts to find him, click here.

The grandfather confirmed this morning that Erk had been found thanks to the foreigner’s phone call and is now staying at his father’s home in Kata.

Erk is addicted to computer gaming and was probably too afraid to come home for fear of being reprimanded, he said.

Mr Shain recounted how he came to the boy’s aid:

“I read the story in the Phuket Gazette a week ago and spotted the boy while I was taking a stroll by myself on Patong Beach, right across from McDonald’s, around 8pm on World Cup final night. It was dark, but I recognized his innocence and his smile while he was trying to sell me the fireworks.

“I saw the boy again two days later at around 6pm. I did not tell him that I knew he was a runaway because I wanted to make sure he would stay there. Deep inside, I also knew that I was the only one who could help the family. Tourists would not have paid such attention; most local Thai people would not have read the Phuket Gazette,” he wrote.

Shain noted that the boy was working just a block away from the police box on the beach at the end of Soi Bangla.

“He looked really happy hanging out and working on the beach, but I finally decided that it was more important for his family to know that he was safe. So I got Mint Thipsuda, a very nice lady friend who works as a masseuse, to call them since I don’t speak Thai.

“I had to pay her boss 500 baht to get her out from work so we could meet up with his family. Mint told them I am from Malaysia, but I am actually a US citizen, born in Malaysia but living in Southern California.

“They showed up in full force, including his uncle, his dad and both his grandpas at around 5:30pm. They were able to locate him before I did. The boy was crying while they tried to console him.

“I took Mint to Fuji at Jungceylon for a nice dinner and we played pool afterward to celebrate the special occasion,” wrote Shain, whose stay in Thailand will come to an end on Saturday.

Mint accepted 1,000 baht from the family for her help, but Shain didn’t ask for the 5,000 baht reward money offered for helping to find Erk.

However, it seems that Shain’s conscience and success brought him an even greater reward.

“I can’t believe that I have actually been able to help reunite a family while I am on my vacation here in Thailand,” he enthused.