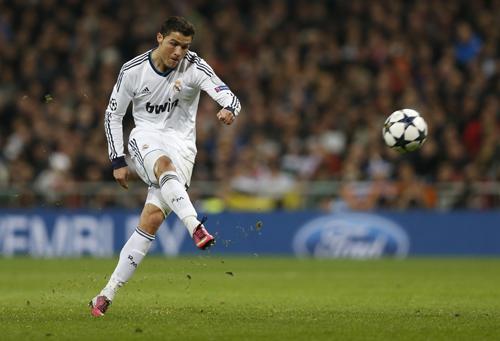 Real gave the Premier League side a torrid time in the early stages but United took the lead against the run of play in the 20th minute when Danny Welbeck nodded past Diego Lopez from a Wayne Rooney corner.

Ronaldo levelled 10 minutes later when he rose to send an Angel Di Maria centre arrowing into the corner.

There was a muted goal celebration from the Portuguese, who became the world’s most expensive player when he left United for Real in 2009.

“It’s a place where I played for six years and I have a lot of affection for the club as everyone knows,” Ronaldo told Spanish television broadcaster Canal Plus.

“United are very strong in defence and they created some problems for us. But with the chances we had, we could have scored more goals

“But everything’s open for the game at Old Trafford and I think we have the ability to score goals there and get through,” he added.

United goalkeeper David De Gea, who earlier tipped a Fabio Coentrao effort on to a post, superbly denied the same player on the hour before Robin Van Persie fluffed a shot when he had the goal at his mercy 18 minutes from time, allowing Xabi Alonso to clear off the line.

The result gives United a slight advantage for the return leg in Manchester on March 5.

Real attacked the visitors’ goal from the start while a ragged United struggled to retain possession.

They had yet to have an attempt on goal when Welbeck slipped marker Sergio Ramos and nodded inside the post for only his second goal in 28 matches.

Ronaldo, who was given a rousing ovation from both sets of fans before kickoff, went close following up on his own free kick before grabbing the equaliser with a trademark towering header.

Real were far more threatening going forward but nearly conceded a second in the 34th minute when Welbeck came close to poking a Van Persie centre past Diego Lopez.

United started the second half brightly but were soon on the back foot as Real continued to press forward.

Although they were seeing little of the ball, the visitors still looked dangerous and Diego Lopez tipped a searing Van Persie drive on to the bar moments before the Netherlands striker squandered a golden chance for United’s second.

He controlled the ball in the area but miscued his volley and Alonso was able to race back and hook the ball away with Lopez stranded.