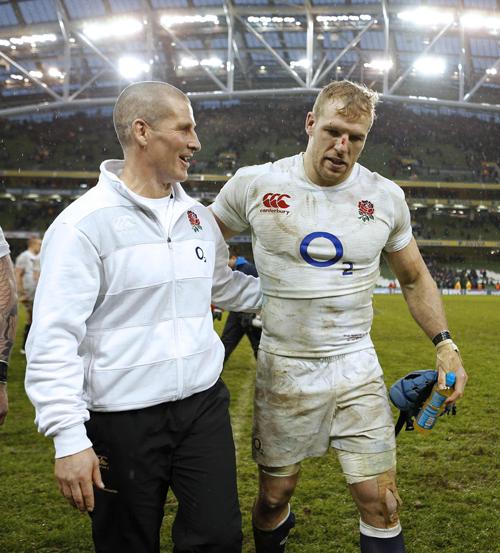 PHUKET: England’s renaissance under coach Stuart Lancaster continued apace yesterday with a first Six Nations win in Ireland in a decade that left the coach and his staff almost in awe of their young side’s maturity.

It was a first trip to a damp Dublin for many of Lancaster’s new-look side and they faced an Irish team not only with more than twice as many caps, but also momentum of their own following impressive back-to-back wins over Argentina and Wales.

That impetus was quickly ended thanks to a string of first-half errors and a high-pressure game from an English team for whom young flyhalf Owen Farrell clinically took his chances in a well deserved 12-6 win.

“To come here with a young side and show that kind of maturity to close the game out was hugely pleasing,” Lancaster, who has transformed England into a far more disciplined unit since taking charge over a year ago, told a news conference.

“It was composure in the heat of the battle. It’s a very difficult place to come and play rugby. To play against a side as good as Ireland with so many experience players when we’ve got lads in single-figure caps, it’s a great testament to their maturity.”

The victory means England are the only unbeaten team in the competition after just two rounds and the only one capable of winning the grand slam, a feat they last accomplished 10 years ago under the captaincy of Lancaster’s predecessor Martin Johnson.

Graham Rowntee, another member of that 2003 squad and now England forwards’ coach, said winning away from home proved the young side had backed up their stunning November victory over world champions New Zealand.

Attacking coach Mike Catt, a World Cup winner in 2003, was similarly impressed, and rounding off the top table of trainers, backs coach Andy Farrell saved his praise for the composure shown when Ireland levelled the scores just after the hour.

Flanker James Haskell had also just been sin-binned but England doubled their lead when down to 14 men with flyhalf Farrell, son of the rugby league great, pulling the strings to ensure a third successive win over the Irish.

“There was a tricky point in the third quarter where we had a couple of back-to-back errors but the way that we composed ourselves and finished the games stronger was a masterclass really of how to handle that last 20 minutes,” Farrell senior said.

“For a young side to play like that in a pressured situation against a team that’s been there and done that many times and been successful with it is a credit to everyone.”

PHUKET: PARIS (Reuters) – France coach Philippe Saint-Andre has hinted that flyhalf Frederic Michalak may not be included when they visit England with a revamped team in their next Six Nations match.

France were beaten 16-6 at home by holders Wales on Saturday, a week after defeat in Italy, and are bottom of the standings with two opening losses for the first time since 1982.

“There certainly will be some changes,” Saint-Andre, who is due to name his 23-man squad on Monday, told a news conference.

“We accept our responsibilities. When you lose the two matches, it’s because you made mistakes. So we are going to try to find some solutions.”

The most significant change could be the axing of 30-year-old Michalak, who shone when France crushed Australia in November but produced poor performances in Rome and against Wales.

“You can see that it becomes hard for him from the 60th minute,” Saint-Andre said. “He is tired, both physically and mentally.”

Michalak, who played his first game for France in two years last June, joined French league leaders Toulon in the off-season after a year at South African side the Sharks.

Should Michalak be left out, Saint-Andre would start Francois Trinh-Duc in the flyhalf position, with Morgan Parra set to replace Maxime Machenaud at scrumhalf because France would need him to take on the kicking duties against England on February 23.

“I stick to my philosophy,” he said. “I will call up those who have a chance to be there in 2015 if they play at the same level.”

PHUKET: A last-gasp try by George North helped defending champions Wales to a 16-6 win against France in the Six Nations at the Stade de France on Saturday, ending an eight-match losing streak.

Flyhalf Dan Biggar chipped through towards wing North, who shrugged off Morgan Parra’s tackle and dived in at the corner with eight minutes left after Frederic Michalak and Leigh Halfpenny had scored two penalties each.

Halfpenny converted and added a penalty five minutes from time to seal Wales’s first win since they beat France at the Millennium stadium to claim the Grand Slam in last year’s Six Nations.

France now face a difficult trip to England in two weeks’ time while Wales will take restored confidence into their match against Italy at the Stadio Olimpico.

“We always knew that we could win, but we had to dig very deep to take that win against France. It’s a great emotion,” Halfpenny told French TV channel France 2.

France, who had started the championship with an embarrassing defeat against Italy, and Wales, who were beaten by Ireland, both defended well but were toothless in attack on a chilly Parisian evening.

Wales looked nothing like the team who claimed the Grand Slam last year until the final minutes.

Their late rally provoked an angry reaction from the Stade de France crowd, who booed the French players off the pitch at the final whistle.

Wales began well with scrumhalf Mike Phillips breaking through a couple of tackles and coming close to the line on a churned-up pitch that quickly deteriorated following heavy rains in Paris.

Biggar tried a drop goal early on from distance but it fell a long way short, while the game was ten minutes old before France made their first foray into the Welsh half.

France went ahead against the run of play thanks to a Michalak penalty after the Wales pack collapsed a scrum 40 metres from the posts.

Halfpenny levelled with an easy penalty after Jocelino Suta failed to roll away.

Bastareaud and Jocelin Suta threatened with powerful runs and France looked set to be rewarded with a try after an extended spell of possession, but the Wales defence held firm and Halfpenny eventually cleared.

The Wales fullback made it 6-3 just minutes into the second half with another penalty straight in front of the posts.

France reshuffled their backline with Francois Trinh-Duc coming on for the injured wing Benjamin Fall and switching positions with Yoann Huget at fullback.

Trinh-Duc missed a routine drop goal as France opted against going for a try when well inside the 22-metre line.

He also brought on Damien Chouly