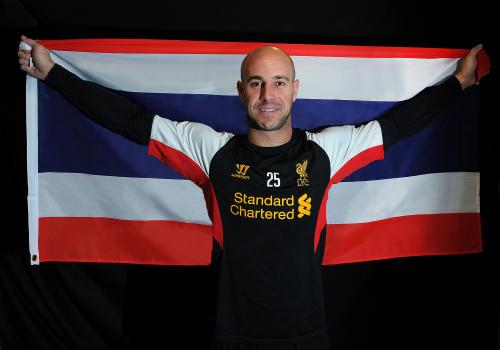 PHUKET: Liverpool FC have announced the club will visit Thailand as part of their 2013-14 pre-season tour presented by Standard Chartered.

The Reds, who last visited Thailand in 2009, will play a match at Bangkok’s Rajamangala National Stadium on Sunday, July 28.

Liverpool FC are estimated to have over 14 million followers in Thailand and this summer’s visit will form just one element of a program of activity – on and off the pitch – that will bring the club closer to its Thai supporters.

The club will bring staff from the Liverpool FC Foundation to carry out work in the community during the visit, while an official Liverpool FC website and Facebook page in Thai will be unveiled prior to the match to complement the official LFC Thailand Twitter account – @ThaiLFC – launched in November, 2012.

Ian Ayre, Liverpool FC managing director, said: “Our last visit to Thailand was during the pre-season tour in 2009, when we received such a warm welcome from our fans. We first went to Thailand in 2001 and this will be our fourth visit to the country, which we feel demonstrates our commitment to our fans in Thailand. Since our last visit, we have created strategic partnerships to maintain the club’s presence in the region.”

Liverpool FC manager Brendan Rodgers added: “The players who went on the last tour to Thailand are really excited about going back. I’ve heard a lot about the passion and dedication of the fans in Thailand and we plan to bring them some great football.”

Ticket details will be announced soon.