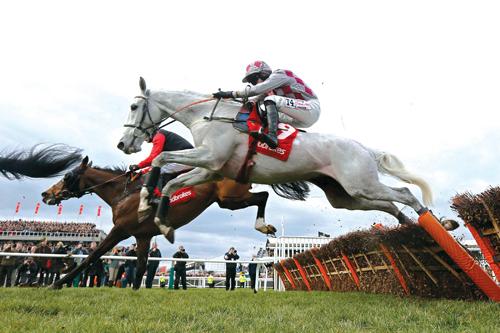 PHUKET: Safety and welfare should always be a priority in jumps racing but the Grand National must remain a test of horse and jockey and not lose its unique character, according to Aintree racecourse chief John Baker.

The deaths of two horses during last year’s race and two in 2011 brought equine safety into focus and prompted an official inquiry amid calls by animal welfare groups for the National, first run in 1839 and now with an estimated global television audience of 600 million, to be banned.

A number of modifications were subsequently recommended, with the organizers making alterations to iconic fences such as the notorious Becher’s Brook.

“They (the National fences) still need jumping, they still need respect and it remains a challenge for horse and jockey which is what it should be,” Baker, overseeing his first National on Saturday, told Reuters.

According to British Horse racing Authority figures, 10 horses have been fatally injured in the Grand National since 2000.

“We have made some hugely significant changes in terms of safety and welfare of the Grand National and we need to be saying: ‘We are proud of what we have done’,” Baker said.

“This is the greatest race in the world, those fences still need to be respected… we’ve maintained that, we’re very strong in that the distance of the race is unique, the number of runners is unique and we need to retain the character of the Grand National.

We have to get the balance right from protecting that uniqueness and character and moving with the times and trying to make sure that safety and welfare is on top of our agenda.”

Saturday’s race is the 40th anniversary of Red Rum’s first of three Aintree National triumphs. That day in 1973, the horse trained by Ginger McCain, beat the luckless Crisp in a thrilling finish.

“It’s been going since 1839 for a reason. People love it. It’s a hugely exciting race with some fantastic stories. That’s what we need to be promoting and talking about on Saturday,” Baker said.

The risks jump jockeys take every day were brought into focus at the Cheltenham Festival last month when Irish amateur JT McNamara suffered a serious neck injury in a fall which has left him paralyzed.

Baker said it was “impossible” to completely eliminate risk from the sport.

“In a sport like this, any athlete is at risk of injury at any time. All everybody wants at any race meeting, not just the Grand National, is for the horses and jockeys to come back safely.

“Racing needs to take responsibility on itself to promote that fact all year round and not just wait for the National to become defensive about it.”

Baker hopes that the 40 jockeys who will saddle up for Saturday’s National will heed
advice from Aintree and the Professional Jockeys Association to curb their speed in what is usually a helter-skelter cavalry charge to the first fence.

“Racing as a whole and everybody involved in the National needs to realize how important this race is to jump racing so everyone involved needs to take some responsibility for it and, for the jockeys, speed is obviously an element to that,” he said.

Horses will parade for a shorter time before the race while the start has been moved further away from the stands in a bid to create a calmer atmosphere.

“The run to the first fence is still a relatively long one. We just hope that when the tape goes up that those jockeys will be in a calmer frame of mind,” Baker said.