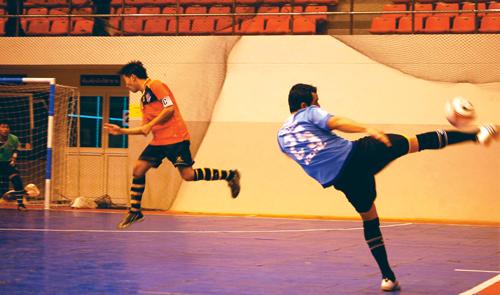 Now the season has come to a close and Jackson has headed back to Brazil to recuperate and take care of his pregnant wife.

Before he left for Brazil, Jackson answered questions about his first, and possibly, last season for Phuket United.

Phuket Gazette: How was your first season for Phuket United?

Jackson Santos: I think it was a good season, because this is the first year the team has played in the national league.

To finish in the top five as a team and for me to finish as the league’s second top goal scorer, I can say that it was a good season.

Will you be coming back to Phuket next season?

I don’t know yet, I need to talk with my manager and review a new contract if possible.

I have received proposals from Brazilian futsal teams and a European team but I would prefer to remain in Thailand.

The town is wonderful, the fans are excellent as is the team and several people within Phuket United have a good heart and that is very important to me.

Why did you choose to come to Phuket to play futsal?

Because Phuket has a very good project. I spoke to many people before coming and they all said good things about the island and the people who work for Phuket United. This made my choice to come play here quite easy.

Are you and the other Brazilian players [Jardel and Marcos] friends?

Yes, they will also be very happy with the season.

How is futsal in Thailand different to playing in Brazil?

Brazil is a power in the futsal world and they have the best team in the world with excellent players. [Brazil won last year’s Futsal World Cup beating Spain 3-2 in the final]

Thailand has been improving each year, and I think that soon more teams will also have a great name in the world futsal scene.

What was the highlight of your season?

The run we put together towards the end of the season [Phuket United finished the season winning seven straight games].

I was very determined to win fifth place and to be the top scorer.

What was the low point of your season?

I believe that when the team lost five games in a row we were not very good or motivated, but that changed.

What has futsal taught you in your career?

A lot of things. I have been playing futsal for 16 years.

Futsal has taught me to know people, their wills, choices, feelings and many other things.

What do you like to do when you are not playing futsal?

I listen to good music, go shopping and surf the internet.

The internet is very important to me as it helps me stay in touch with my family back in Brazil.

Do you have a message for the Phuket United fans?

I want to thank all of the fans one by one and say thank you for the support throughout the season.