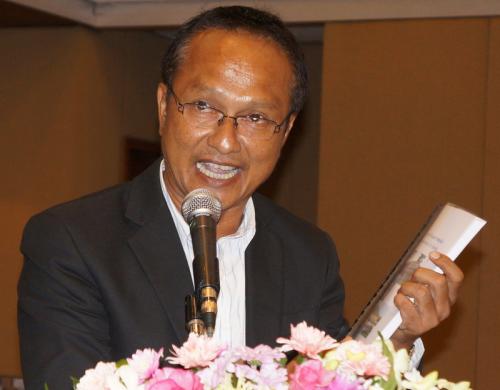 PHUKET: Phuket Governor Maitri Inthusut yesterday announced he would call in officers from Bangkok to help verify – or discredit – claims made by opponents to Phuket’s proposed new 450-million-baht Provincial Hall.

The debate over whether or not the new five-story building should be built at Sanam Chai (map here) continued yesterday with hundreds of local residents turning out at a public meeting chaired by Governor Maitri.

Rungsan Kongthong, one of the key opponents to the project, alleged that the proposed new building contravenes the Public Works and Town & Country Planning Act.

“Sanam Chai is designated a public recreation area where construction is prohibited,” he said.

“Also, the field is a part of Phuket’s history. So many things have happened at the site. It is even called Chai, which means ‘victory’. It is a place of auspicious beginnings. Phuket people have many good memories of the field,” he added.

Mr Rangsan also alleged that some of the land the government plans to build on is private land.

“Some of the land the field occupies is not government land, it does not belong to the Treasury Department. Some areas are privately owned,” Mr Rungsan said.

He also alleged that the size of the new building would not leave enough room at the site for the popular tennis courts to remain.

“Phuket residents are concerned about losing the football field and the tennis courts, which they use not only for sport, but also for social and community events,” he added.

“Once the construction is finished, it will become a government property, which means security will be set and Phuket people who used to go to the field will be prohibited, as the multi-million baht building will need to be protected,” Mr Rangsan added.

“The field belongs to Phuket people. Please build the new Provincial Hall somewhere else,” he said.

“Please reconsider this, do not build on our historical land that we always use for social and community events,” Mr Suratin added.

Patong Mayor Pian Keesin, a Phuket native, appealed for people to allow rational progress. “It is time for Phuket to move on. We all love Phuket, but please think forward,” he said.

“Phuket is growing and I believe this building is appropriate: it matches Phuket’s image, it’s a nice building and it will help alleviate the shortage of parking spaces in Phuket Town.

“It took years to get the 450mn-baht budget from the Cabinet. That much money being given to us means it makes sense to build the new hall,” he said.

Governor Maitri explained that the current Provincial Hall has been in use for 105 years.

“The building is showing its age and is too small. It is crowded when many people meet there at the same time,” he said.

Governor Maitri was very clear that he would do his best to make sure the new building goes ahead.

“Please be informed that I have been ordered by the Minister of Interior to finish this project. I have received the order and I will get it done,” he stated.

“I would like to hold another meeting to clarify matters. Five of the protestors will act as representatives. Officers from relevant central departments in Bangkok will join the meeting to clarify all the issues, including land ownership and where the building will be built,” the governor said.

“We need to resolve this conflict and move forward together,” Gov Maitri added.