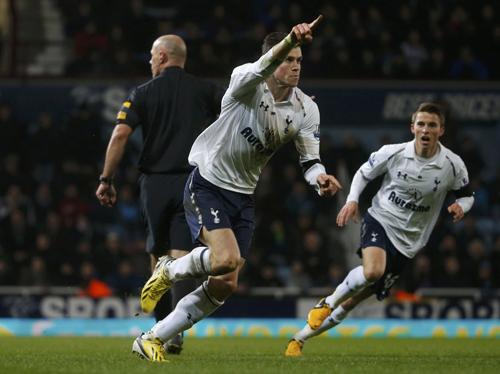 PHUKET: Gareth Bale’s stunning late goal lifted Tottenham Hotspur to a 3-2 win over West Ham United on yesterday which took them up to third in the Premier League table.

Bale opened the scoring on 13 minutes but left his best until the 90th minute when he unleashed a rocket of a shot past goalkeeper Jussi Jaaskelainen who had been in brilliant form to deny the visitors on several occasions.

A penalty from Andy Carroll and a Joe Cole strike in the second half had put the hosts ahead but Iceland midfielder Gylfi Sigurdsson levelled for Spurs with 14 minutes remaining.

Spurs went two points clear of Chelsea on 51 points while West Ham dropped to 14th on a poignant night for the east London club, who honoured former player and England’s 1966 World Cup-winning captain Bobby Moore on the 20th anniversary of his death.

In a statement, the north London club said 40.9mn had been spent on signing Lukas Podolski, Santi Cazorla and Olivier Giroud and extending the contracts of players including England internationals Theo Walcott and Jack Wilshere.

Player sales netted 42.5mn while turnover dropped from 113.5mn pounds to 106mn as a result of four fewer home fixtures compared to the same period in the previous year.

The profit for the six months to November 2011 included the sale of Cesc Fabregas, Samir Nasri and Gael Clichy.

Arsenal, which is majority-owned by American Stan Kroenke, said it had no short-term debt and possessed cash reserves of 123.4 million pounds compared to 115.2 million a year earlier.

“Our ability to compete at the top of the game here and in Europe is underpinned by our financial performance which gives the club strength and independence,” chairman Peter Hill-Wood said.

Arsenal fans have become increasing frustrated by their team’s failure to win a trophy since the 2005 FA Cup and have urged manager Arsene Wenger to spend freely on buying top-quality players to replace Fabregas and Robin van Persie, who was sold to Manchester United last year.

The club were knocked out of the League and FA Cups this season and they lost their Champions League last-16 first leg 3-1 at home to a clearly superior Bayern Munich side (click here for match report).

Wenger, whose contract expires at the end of next season, gained some relief at the weekend when his side defeated Aston Villa 2-1 in the Premier League after losing to Bayern Munich and being knocked out of the FA Cup by Blackburn Rovers.

Arsenal are fifth in the Premier League behind London rivals Tottenham Hotspur, one place off a Champions League spot. They play Tottenham at White Hart Lane next Sunday

PHUKET: Swansea City coach Michael Laudrup is flattered by Real Madrid fans wanting him to return to the club as their next manager but said yesterday he intends to stay in Wales next season.

Laudrup, 48, was talking the day after Premier League Swansea won the first major title in their 100-year history by crushing fourth tier Bradford City by a record 5-0 scoreline in the Capital One (League) Cup final at Wembley.

“I’ve said I’d like to stay here but even if you have a 10-year deal, there will always be rumours.

“My intention is to stay here next year, that’s the only thing I can say really,” the Dane, who previously managed Getafe and Real Mallorca in Spain, told Sky Sports.

A ballot by Spanish newspaper AS showed 78 percent of the 40,000 Real fans polled would prefer Laudrup to either Rafael Benitez or Carlo Ancelotti if boss Jose Mourinho leaves the club as is widely expected at the end of the campaign.

However, former Real player Laudrup intends to see out the remaining year on his contract at Swansea and will not be drawn on his future beyond that.

“I am proud of that because there were 40,000 voters and it’s 78 percent in front of two huge names like Rafael Benitez and Carlo Ancelotti, who have won league titles in Italy and Spain and the Champions League. So I’m very grateful,” he said.

“But I can’t really say anything more. There will always be rumours but this time it’s positive rumours about one club or another club.

“I can only sustain what I’ve said before – my intention is to stay here, I have one more year on my contract. And that’s it.”

Swansea, who have secured a place in the qualifying rounds of next season’s Europa League, are also chasing a top-half finish in the Premier League and have been widely applauded this season for their attractive passing game which Laudrup maintained after taking over from Brendan Rodgers when he moved to Liverpool last year.