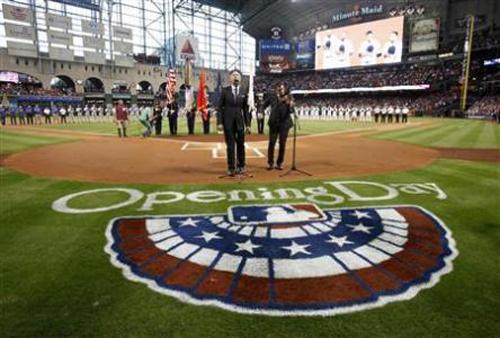 It is a rite of spring for millions of Americans, who view Opening Day as tangible evidence that the chill of winter will soon fade into memory.

It is also a clean slate for fans of even the most humble of teams. Hundreds of thousands of fans take the day off from work and kids miss school to celebrate the renewal of the Summer Game on the perfectly manicured green diamonds.

It is a day that has been marked in the past by U.S. presidents tossing out the first pitch and cities throwing parades to mark the beginning of a new six-month drama about to unfold.

At Yankee Stadium, a new installment to the century-long rivalry with the Boston Red Sox began with the visitors claiming an 8-2 victory over the New Yorkers in front of an audience of nearly 50,000.

“Every Opening Day is met with a lot of anticipation,” first-year Red Sox manager John Farrell, who took over a club that finished last in the American League East in 2012, told reporters before the game.

“At 3 o’clock I woke up. Today is a great day all around the game, particularly here.”

In Washington, the Nationals, who won a major league-best 98 games last year, set a home park record with more than 45,000 fans, who roared during player introductions and all the way through their 2-0 win over the Miami Marlins.

With televised coverage of games from afternoon to midnight, another Monday marquee match-up was taking place on the Pacific Coast as the World Series champion San Francisco Giants faced their arch rivals, the Los Angeles Dodgers, with a mouth-watering pitching match-up in the offing.

Matt Cain, coming off a season that included a perfect game and the championship clinching victory, was going against Clayton Kershaw, arguably the game’s best young pitcher for a Dodgers franchise that has loaded up their roster with a record high payroll in their zeal to overtake the Giants.

During a moment of silence, the victims’ names were displayed on the centerfield video board.

Once the game began, Yankees fans did not have much to cheer as Boston seized control with four runs in the second inning off New York ace CC Sabathia, who did not have the customary zip on fastball.

New York scored a pair of runs in the fourth against Red Sox starter Jon Lester to make it 4-2, but a Boston run in the seventh, before the traditional singing of Take Me Out To The Ball Game, and three more in the ninth turned it into a rout.

What started out as a mild afternoon that held the promise of sunny summer days ahead, turned cold and rainy in the Bronx and the sold-out crowd disappeared into the New York City rush hour by the time the Yankees took their last turn at bat.

“It got kind of raw in a sense. It is a school night as well and it started raining,” said Girardi, hoping there would be sunnier days ahead for his Yankees who were out-hit 13-6.