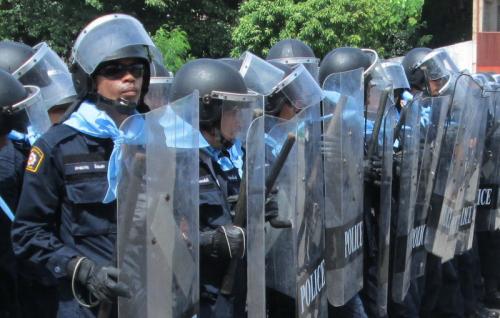 PHUKET: More than 300 officers from every police station in Phuket have been rehearsing their riot control skills at the field behind Phuket City Police Station yesterday and today in preparation for a contest that will pit them against fellow police from throughout Upper Southern Thailand.

“The objective is to maintain our preparedness for situations of civil unrest and to prepare for a competition at Provincial Police Region 8 headquarters in Surat Thani,” Phuket Provincial Police Commander Choti Chavalviwat said.

During the practice sessions, officers have been drilled in crowd-control tactics, such as keeping opposing crowd factions separate and using tear gas and water cannons to disperse unruly mobs.

The 300 officers began their riot exercises last month, but their training regimen is about to be ramped up.

“We will now try to hold the crowd-control training once a week” Maj Gen Choti said.

More than 100 troopers from Phuket will take part in the competition in Surat Thani, though a date has yet to be set for the contest, he added.

“I am confident our police officers are now ready to face such situations,” Maj Gen Choti said.