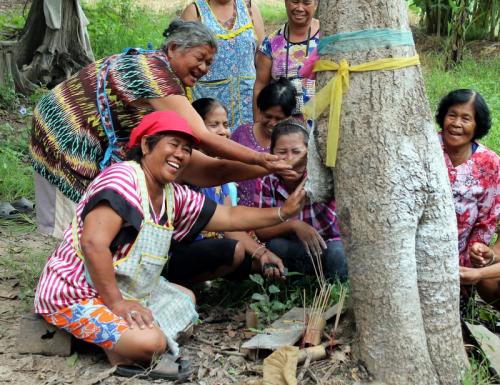 PHUKET: A tree that bears a remarkable resemblance to a man’s nether regions is setting pulses racing in a village in the province of Kamphaeng Phet.

The mango tree, which was found on land belonging to 50-year-old Mrs Lot Panthap, appears to have two legs, an arse, and a dork (or ‘penis’) hanging in the balance.

Local villagers have been flocking to Mrs Lot’s home bearing flowers and candles to pay their respects to the unusual tree.

As part of what has now become an almost daily ritual, the women rub the tree’s pudendum with white powder, hoping to gain good fortune and divine lottery numbers from it.

One lady has reportedly won the lottery twice in a row after getting numbers from the tree, which has led to even more people coming to try their luck with the magic knob.

Mrs Lot said she planted the tree, a mango strain that Thais call ok rong (which means ‘cleavage’), more than 20 years ago.

She said the tree had had its charming protrusion ever since it was a seedling, and that she had thought nothing of it.

But recently one of her neighbors was sitting in its shade when she became caught up in the tree’s aura, compelling her to examine things further. One thing led to another and… bang, there you have it.