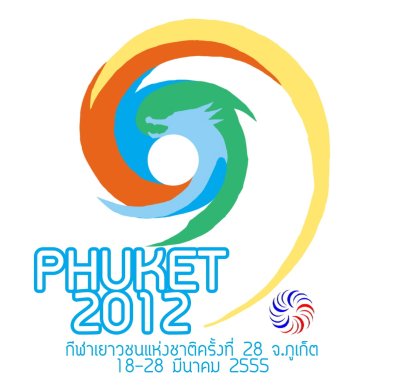 PHUKET: The humanoid blue starfish unveiled at the beginning of this month as Phuket’s official mascot for the 28th Thailand Youth Games has been laid to rest – to be replaced by a “cute” sea dragon.

The news follows a meeting on Tuesday at which Sports Authority of Thailand (SAT) Phuket Office Director Wirat Patee confirmed the starfish mascot idea was dead.

Instead, the mascot for the games, to be hosted in Phuket from March 18-28 next year, will be a “Hai Leng Ong” Sea Dragon – similar to the statue in Queen Sirikit Park in Phuket Town.

The new mascot will be designed Kanya “Boon” Ruengjaruwatana, the same former student at Phuket Wittayalai School who designed the starfish.

Although the artwork has yet to be drawn up, the concept agreed by the committee will see the dragon centered on a pearl white background with four “waves” of different colors joining together and forming a spiral toward the center of the logo.

The logo overall is to represent young athletes from across the country gathering in Phuket.

The pearl white background is to represent Phuket’s reputation as the “Pearl of the Andaman”, and the waves to signify power power and unity.

The sea dragon, representing Phuket, is to sit in the center of the logo.

The concept of using a Hai Leng Ong sea dragon as the mascot was the idea of Phanuwat Sa-ngaem, a teacher at the Faculty of Fine and Applied Arts at Phuket Rajabhat University, explained Director Wirat.

Mr Phanuwat came up with the idea from a Phuket legend that said Phuket Island was a golden sea dragon emerging from the Indian Ocean.

Director Wirat added that the final draft of the figure could not be released now as more time was needed to make it into a “cute” style.

Phuket snatch banditry on the rise