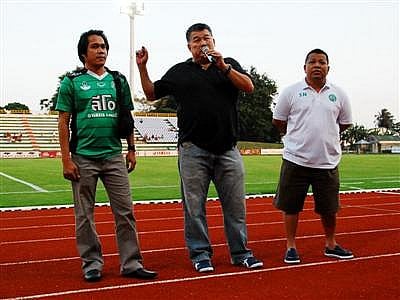 PHUKET: Despite losing at home 4-1 to Bangkok FC last night, FC Phuket and their supporters left Surakul Stadium in jubilation knowing that the the team’s future is now secure: Thai Premier League (TPL) powerhouse side Muang Thong United has promised to support the team in the 2012-2013 campaign.

Mr Paitoon, also president of the Sports News Photography Association of Thailand, said: “I am pleased to bring you all some good news. Over the past few days, many rumors have been spreading that FC Phuket would cease to exist due to financial problems. But good news has just arrived. At 4pm today, executives of Muang Thong United met at their Yamaha Stadium and agreed to support FC Phuket.”

Amid jubilant screams and cheers by FC Phuket supporters who thought they were attending the team’s final match, the pair announced that the new manager would be Wilak Lothong.

Mr Wilak, the director of Siamsport Syndicate PCL and son of its chairman Rawi Lothong, will oversee all aspects of team operations, including payment and recruitment of players and coaching staff, the fans were told.

Rather than disappear into the ether, the Southern Sea Kirin’s task for 2012 will be to join Muang Thong United in the TPL, he said.

“Next season, we will aim for promotion to the TPL. Thank you to everyone for your support,” he said.

Pattakorn Sinsaowapak, who leads a large contingent of FC Phuket fans who identify themselves as ‘The Hulks’, was ecstatic following the surprise announcement.

“Before this match we worried that this would be FC Phuket’s last-ever match. But with the club executives’ announcement that FC Phuket would remain here and continue to use Surakul Stadium as host field, we are so happy.

“We feel like we have been reborn. We have cheered the team for three years. It was as if we watered a plant everyday, only to find it suddenly uprooted. But now we know that it is still alive. Would like to say ‘thank you’ to Muang Thong United for their support.”

So elated were the fans that the feelings of euphoria were not much diminished by the less-than-spectacular match that followed.

Twelfth place Bangkok FC got an early lead on a goal in the seventh minute by Samerpak Srinon. Thirty minutes later, FC Phuket equalized on a nice goal by Niran Panthong and the two teams went into the locker rooms even at 1-1.

After that it was all Bangkok FC, however, as Samerpak scored again at 77 minutes and UK import Lee Tuck put the icing on the cake ten minutes later.

Tuck, fouled by Sarach Yooyen and Poramat Krongborisut in extra time, converted the spot kick to put his side up 4-1 before the final whistle.

Acting FC Phuket Coach Apichart Mosika put down the weak performance to lack of endurance coupled with the loss of many of its core foreign players.

“We only had a few days to train for the match. Anyway, everyone did their best. This is now a young team and I believe they will only get better with more experience and develop into quality players,” he said.

In their final fixture of the season, the new-look Southern Sea Kirin will travel to Chainat to play the high-flying Hornbills, who have already secured passage to the elite Thai Premier League.