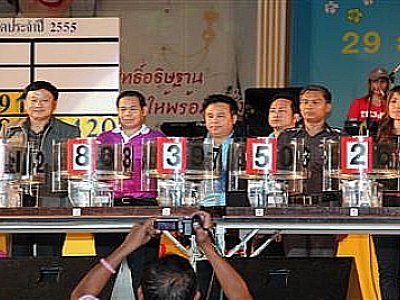 PHUKET: A huge crowd was on hand at Saphan Hin park in Phuket Town last night for the draw of winning prize numbers in the annual Phuket Red Cross Fair charity raffle.

Leading the top local and national officials who took part in the random draw was Phuket Governor Tri Augkaradacha.

The lucky holder of ticket number 38352, who has yet to be identified, should report to the Phuket Red Cross office at Phuket Provincial Hall by the end of February to claim his or her grand prize, a brand new Honda City sedan.

Other prize winning number were:

Thirty holders of tickets with the final four digits 671 also have prizes waiting for them at the Phuket Red Cross office.

Only those actually holding winning tickets are eligible to collect prizes.

The fun at the annual Good Things of Phuket and annual Red Cross Fair continues tonight and tomorrow night at the central stage area at Saphan Hin.

A variety of live entertainment is staged nightly, with plenty of food, beverages, games, shopping and amusement rides for children.