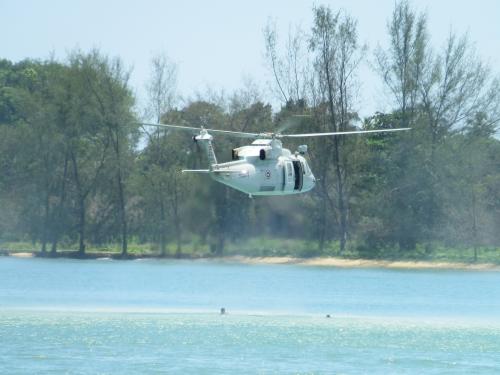 PHUKET: A total of about 300 emergency-response officers from Phuket and Phang Nga joined forces to stage a full-scale tsunami evacuation and sea rescue drill off the northern tip of Phuket yesterday.

The drill started with the sounding of the tsunami warning alarm, prompting the officers from the Department of Disaster Prevention and Mitigation (DDPM) in Phuket and Phang Nga to leap into action.

“Every department handled the rescue situation very well and was on alert to play their part,” he added.

The drill simulated a response to a tsunami striking the coast after a major earthquake off the northern tip of Sumatra in Indonesia – the real-life factors that triggered the tsunami in 2004.

After the tsunami drill, the officers conducted an earthquake evacuation drill, responding to a simulated quake that cracks the three bridges joining Phuket to the Thai mainland, causes car accidents and leaves 20 people injured.

In the drill, officers from Thai Navy Third Area Command used a helicopter to search for and rescue survivors.

“With both exercises now over, we will call in our teams and summarize the problems we encountered today and review what measures need to be taken in order to improve our response,” Mr Udomporn said.