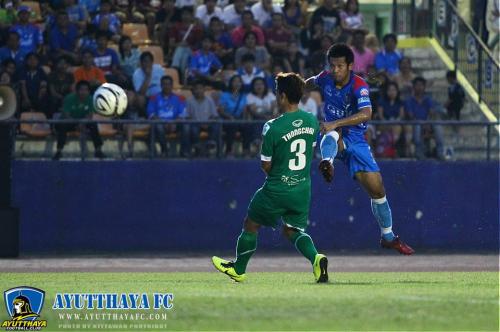 PHUKET: The Islanders failed to beat Ayutthaya FC in their Yamaha League One (YL1) away game on Saturday.

The 1-1 draw dropped Phuket FC down to 6th in the table, five points behind top of the table Air Force United. Ayutthaya are third from bottom after 10 games.

The home team took the lead in the 36th minute after Phuket’s keeper was easily beaten at his near post by a rising shot from 10 yards by Watcharaphong Khongchuai.

Ayutthaya should have won the game in the 94th minute but their player dragged his shot from the edge of the six yard box wide of the far post.

Phuket have failed to win in their last three games, one loss and two draws. Their next game is against second from bottom Rayong FC on May 18 at Surakul Stadium.

To get their push for promotion up and running Phuket need a victory against a Rayong team that has not won a game all season.

Not open yet, but Phuket’s Chalong Marina already needs repairs