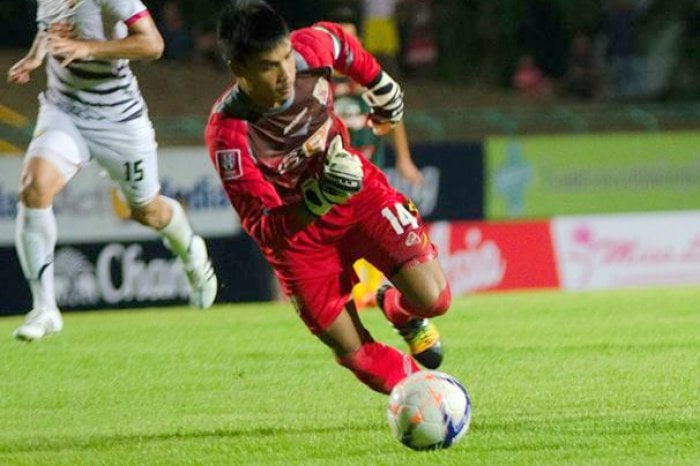 PHUKET: The island’s premier football club, Phuket FC, threw away their chance to climb to the top of the Yamaha League One division with a 1-1 draw against top side BBCU at Surakul Stadium last night.

BBCU almost had a dream start to the match. In the third minute of play, Nakul Pinthong fired in a free kick from the left corner to the far post to meet a diving header by Wan Ji Si, forcing Phuket FC keeper Piyawat Intaphim to make the first save of the match.

The next clear opportunity came in the 19th minute, when a misplaced pass by BBCU landed at the feet of Phuket striker Pipat Tonkanya, who had only the BBCU goalkeeper, Kittipong Jansuwan, to beat.

Pipat tried rounding the keeper with a right-footed shot, but failed to get the ball past Kittipong.

Phuket FC took the lead in the 25th minute, with nice footwork from midfielder Suriya Pawarana, who intercepted a pass and quickly offloaded the ball to Pipat, who headed it on to Prathan Srinala, who was waiting in the box.

The scrambling BBCU defense brought down Prathan, and the referee quickly pointed to the penalty spot.

Phuket’s defensive midfielder Yusake Sato stepped up to take the penalty, and neatly slotted the ball into the left corner after sending BBCU keeper Kittipong in the wrong direction.

Goal-scoring chances were few and far between in the second half, as both teams pressed well, stifling any real chances for clear shots on goal.

But BBCU found their equalizer in the 79th minute with a shot by Teeracha Kampien from well outside the box.

“This is an important lesson, and we should learn from it,” he said. “We lost focus in the last 10 minutes of the game and it cost us the full three points.

“But I am happy with the way our team played. The boys played very well and kept to our game plan.”

The draw cost BBCU, as well as Phuket FC, the chance to hold on to the top slot on the Yamaha League One division table.

That glory now belongs to Ang Thong with six points from two matches, while BBCU slips into second place on four points, along with Phuket FC and three other teams

Phuket FC will continue their 2015 campaign with their away match to Sukhothai on March 1.

For Phuket FC’s schedule of Yamaha Division 1 fixtures through to the end of April, click here.

Motorcyclist dies in collision on “shortcut’ to Phuket Airport