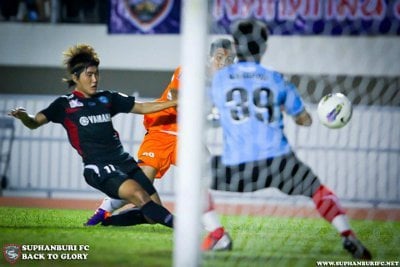 PHUKET: The Islanders suffered their third straight loss and subsequently slipped into 15th place of the 18-team team league, following a 2-0 scoreline away at Suphanburi on Saturday night.

One goal in each half by the Suphanburi FC Elephant Cavalry’s Yodrak Namangrak and Phaisan Pona on 23 and 53 minutes, respectively, sealed the result, securing the home side’s second-place standing and thus furthering their prospects for promotion to the Thai Premier League.

For highlights of the goals and action, click here.

With only four matches remaining to prove their Division 1 worth, the Islanders find themselves facing an uphill battle for survival in their final four matches of the season.

With little time to rest after their latest loss, the Islanders immediately returned to Phuket to prepare for their next match, this Wednesday against 13th-place Khon Kaen FC.

Like Phuket, the Khon Kaen “T-Rex” are also staring at the threat of relegation and thus need at least one point (though no doubt aiming for three) from the mid-week match, to be played at Surakul Stadium with a 6:30pm kickoff.

Win, lose or draw, Phuket FC waste no time to hit the road to take on third-place Bangkok United this Saturday, October 13 in the Thai capital.

Bangkok, who beat Phuket 3-0 earlier in the season in Phuket, must win all of their remaining matches to secure promotion to the Premier League.

Then, the Islanders are set to play their final away match of the season a week later in Nakhon Pathom against current 17th place, Rajpracha FC on October 20

After that, Phuket will have only one more week to prepare for the season finale at home against 15th-place JW Rangsit.

Like Phuket, all of Phuket’s remaining opponents – Bangkok United, Rajpracha, Khon Kaen and JW Rangsit – all have everything to gain and everything to lose in their final stretch of the season.

While Chanthaburi FC is the only team who can not escape relegation, due to the small margins in point differences and mathematical possibilities, 11 teams still have a chance of falling into this year’s relegation pot of five teams.

Though promotion is now out of reach for Krabi FC, they have at least escaped the grasp of relegation and will thus have a low-pressure final run.

Meanwhile, the promotion contest is heating up with the top five teams contending three spots. Though Ratchaburi in distant first has already secured promotion, the final two places will be fought out between Suphanburi, Bangkok United, Sri Racha and PTT Rayong.

Other results this weekend:

Other Division 1 matches to be played Wednesday: