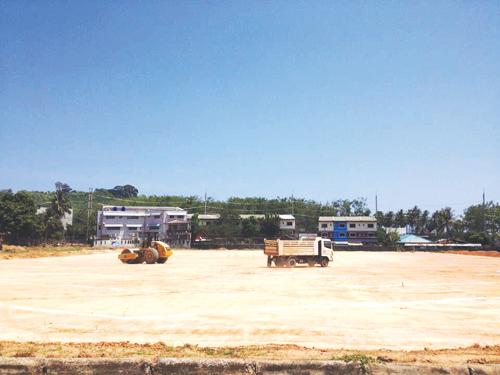 This complex will afford players badly needed upgrades to equipment and facilities and will include a natural grass football pitch, as well as an artificial grass pitch, swimming pool, fitness center and physical therapy room.

Work is underway to level the ground beneath the complex and install a drainage system, which will be up to European standard in terms of stadium and facility construction.

According to a statement released on the team’s website: “The grass will be laid by the end of this month and we expect completion to be later this year. We will keep you updated on [our] progress.”

The grass planting ceremony was held earlier this week and attended by honorable guest, Mr Ron van Oijen, AIA insurance firm’s Thailand CEO, as well as other administrators from the company.

The team says the grass will need to mature for a period of three months before it is ready to play on.

A spokesperson from the Phuket FC office told the Gazette that the primary reason the team is constructing the new grounds is to have their own dedicated training facility.

The club had previously utilized the FIFA Tsunami Memorial Football center, commonly known as “Sanam Fifa” (literally, FIFA field), which is located on Chao Fa East Road, on the way to Cape Panwa.

According to the Phuket FC spokesperson, the Sanam Fifa facility, which is valued at between 40 and 80 million baht, was under the management and control of the Football Association of Thailand (FAT), and Phuket FC simply wanted their own facility.

The new facility has an estimated value of no less than 260mn baht, of which 200mn baht was used to purchase the land the facility is being constructed on.