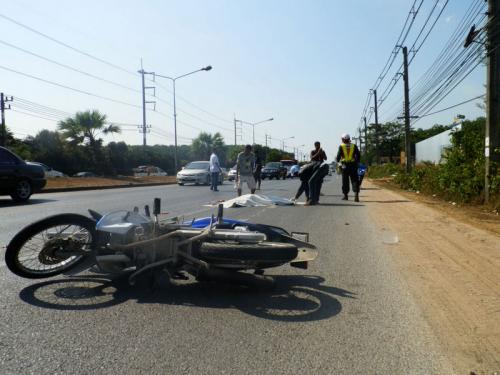 PHUKET: A 43-year-old Burmese man dodging between another motorbike and a 22-wheeled truck and trailer died instantly yesterday afternoon when he lost control of the motorbike and was crushed under the rear wheels of the juggernaut.

Thalang Police were notified of the accident, near the Baan Nai Klum u-turn, about 500 meters south of Tesco Lotus Thalang (map here), at 3:30pm.

The truck driver, Taweechai Aongphoo, 43, did not flee the scene.

“According to one witness, Mr Win was riding his motorbike at high speed and trying to overtake another motorcycle when he lost control and fell down,” Capt Narong said.

“We believe the air displaced by the truck sucked him into the side of the trailer and he fell and went under the truck, and was crushed by the rear wheels,” he added.

The truck, a 10-wheeled tractor unit pulling a 12-wheeled trailer, was fully loaded with sand bound for a Phuket construction site when the accident occurred.

Mr Win died instantly when his head was crushed by the rear wheels, Capt Narong said.