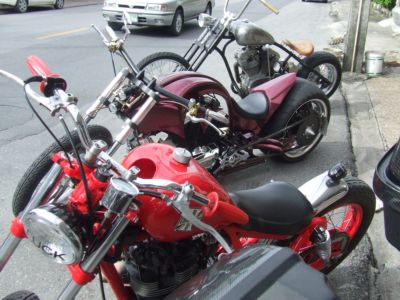 Motorcycles subject to prohibitive tariffs have long been assembled from parts by ‘grey market’ operators in order to avoid paying the tax.

Now excise officials insist the owners of such vehicles – not the builders – must pay anyway.

Surat Saengnet, of the Phuket Provincial Excise Office, announced in a meeting at Phuket Provincial Hall that “anyone who owns such vehicles – which are mostly big bikes such as Harley Davidsons – will have to pay an excise of 3.3 percent of the vehicle price.”

Owners who pay up before the deadline will not be fined.

Those who fail to do so and get caught will be “fined from two to ten times the tax amount,” Mr Surat said.

Another official at the Excise Office explained that “owners must provide documents showing their vehicles’ engine and body numbers, as well as invoices and receipts for parts.

“These documents are sent to the Excise Office’s Value Pricing division, where a figure for the value of a vehicle is established. The tax rate is set from that,” she said.

The official said the rate charged is “the same as that for new bikes. Also new motorbikes imported from abroad must pay excise tax.”

“Excise tax has been collected since 1997,” said Surat, “but we concentrated on motorcycles in shops. Now we will be much stricter, checking all of them.”

Normally, spare parts imported from abroad are taxed according to the tariff on spare parts – which is significantly less than the rate for completely assembled vehicles.

Over the last three months, some 400 persons have been caught with motorcycles that evaded the excise.

Nicky’s Handle Bar and big bike shop owner Somneuk ‘Nicky’ Phonkaew told the Gazette, “I have just one such bike and it has already been taxed. If you follow the rules, you don’t have any hassles.”

Wanlop Inthanop of the Phuket Land Transport Office said, “Parts assembled into motorcycles must be examined by the Thai Industrial Standards Institute of the Ministry of Industry in Bangkok. They receive certification only if they meet the institute’s standards.”

After passing that hurdle, owners must pay the excise tax – and only then will the Land Transport Office allow them to register their vehicles.