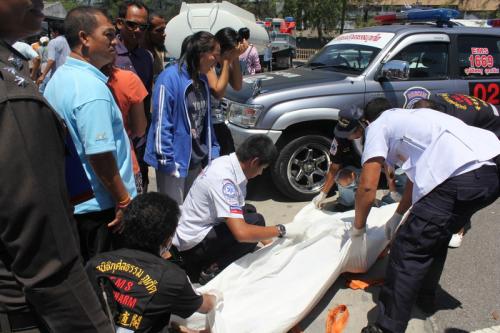 PHUKET: Police are investigating the death of a bus driver whose body was found, still standing, pinned by the partially closed door of his own bus this morning.

Phuket native Ekkarat Sarapol, 29, from Wichit, arrived and parked his Sawat Travel Company bus alongside other tour buses at the Phuket Boat Lagoon, north of Phuket Town, at 6am.

He was last seen alive at 7am by a security guard who saw him cleaning and preparing the bus to take guests to Phang Nga.

“Because he was out of clear sight, between other buses, his body was not discovered until 9:30am,” Lt Jirawat Tancheun of Phuket City Police explained.

“We believe he pressed the button to close the door, but slipped while walking down the stairs and was trapped by the closing door,” Lt Jirawat said.

“His neck shows deep bruising caused by the force of the door. We believe that he suffocated, as his airway was blocked.

“He was stuck and could not call for help,” he said.

“However, we will continue our investigation as other factors may be involved in the death,” Lt Jirawat explained.

Mr Ekkarat started working with Sawat Travel as a tour bus driver only three days ago, the Phuket Gazette was told.

“The bus is also new to the company, which acquired it a month ago,” Lt Jirawat added.

Ministry of Justice steps up to help Phuket sea gypsies