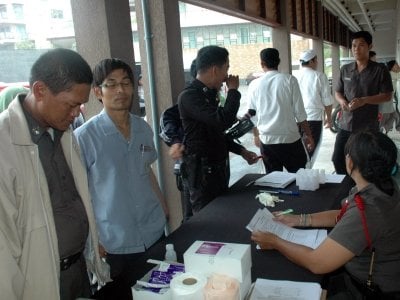 Westin hotel manager Sean Raine last week signed the White Hotel memorandum of understanding (MoU), pledging to adopt the so-called “Triple No!” strategy in dealing with illegal narcotics use on the resort’s premises: No drug makers, no drug traders and no drug takers.

Col Wanchai said the day marked the first step in a new understanding between the Phuket City Police and the hotel.

He said the hotel and police had agreed to cooperate and campaign against illegal drugs so employees and guests know the dangers.

Staff will be trained in ways to spot behavior that could be indicative of drug dealing or drug use, as well as how to report suspicious individuals to the authorities.

Mr Raine said the hotel’s signing of the MoU was a show of support for the local community and its commitment to work with local police to rid the island of illegal drugs.

However, a Phuket Gazette readers poll in November revealed considerable cynicism about whether the project would have the desired effect, with 45.2% of respondents having no conviction that random drug testing would reduce illegal drug use.

The White Hotel project was launched in October last year when representatives of 75 accommodation establishments met for a briefing on the initiative.

Phuket water woes in the spotlight

Phuket teen gunned down in Thalang