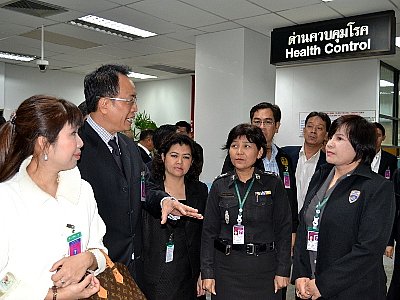 PHUKET: Phuket International Airport has only half the number of Immigration officers it needs to effectively handle the high volume of tourists using the facility, the leading senator of a fact-finding team was told today.

The team, comprising the 26 senators who form the Standing Committees for Transport and for Natural Resources and the Environment, arrived in Phuket yesterday to conduct an inspection of the airport and to hear firsthand the critical issues affecting Phuket’s key tourism facility.

“There should be at least 22 Immigration officers, but right now there are only 11,” said Paradee Chongsuktanamanee, senator for Chiang Rai and president of the Senate’s standing sub-committee for air transport.

“Passengers still have to wait in long lines even though it’s low season,” she said.

Phuket Senator Thanyarat Atchariyachai pointed out that some passengers had to sit on the floor while waiting for their plane.

To this, Airport Service Senior Officer Thanin Silpachamnan said that 250 more seats will be added to the international departure hall as a temporary measure.

“Right now, there are 1,213 seats. We expect to have the extra seats installed by September, before high season begins,” he said.

Phuket Tourist Association (PTA) President Somboon Jirayus voiced his criticism of the airport for having too many shops.

“There are far more shops than needed. The airport is not a department store. Every passenger does not use the airport for free. They also pay the airport fee. They are also airport customers.

“The core business of the airport is airlines and passengers. Convenience for passengers should be our top priority. I understand the AoT [Airports of Thailand] wants to make profits, but I would like the AoT to consider other issues too, especially the convenience of passengers,” he said.

“We will discuss these issues with Immigration Police and AoT headquarters to help solve these problems,” Senator Paradee said.

The team of senators will visit Patong Municipality offices today to hear about the growing problems with water pollution, stink and trash there.

There was no mention of tuk-tuks or jet-skis.

The senators are scheduled to fly back to Bangkok tomorrow afternoon.

Yingluck’s official, but who will call the shots?