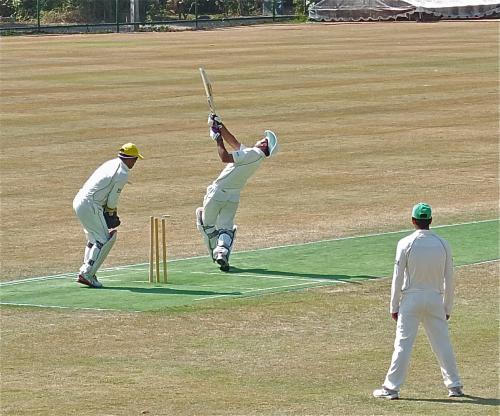 PHUKET: In match 11 of the Jones Lang LaSalle (JLL) cricket league, on Sunday, February 23 at the Alan Cooke Ground (ACG), Laguna were matched up against the Island Cricket Club (ICC). In their last encounter, Laguna snatched victory by just one run, and coming off the back of a humiliating defeat in their last outing versus Thalang, ICC were looking for a much better showing.

Laguna won the toss and chose to bat first, looking to take advantage of a fast outfield and hoping to drain the energy of ICC players with the first stint in the field under a baking hot Phuket sun. Laguna got off to a great start, with openers Manish Sadarangani (74) and Darren Shaw (24) putting on an opening stand of 74 runs before Shaw was bowled.

Sameer Khan (26) and Sadarangani then put on a further 52 runs before Kahn was trapped in front LBW at the start of the 28th over with the score on 130-3. Captain Stuart Reading (31), then joined Sadarangani and accelerated the run-rate with a further 32 run partnership in the next three overs before Sadarangani was dismissed stepping back onto his wicket to dislodge the bails.

Reading was out 15 runs later, falling victim to a solid catch by Ravi Naik at backward point. Nadeem Yuoseff (9) and Roly Cooper (8 not out) added a further 16 runs from the last few overs, and Laguna finished the innings with a score of 193 for the loss of 6 wickets. Pick of the bowlers for ICC were Syed Hussain (3 for 42) and Iqbal Malik (2 for 26).

After the lunch break, with a required run-rate of 5.5 per over, ICC could not afford to get off to a slow start. After starting off well in the first couple of overs, Shah Ullah then skied a shot to be caught by Reading and was headed back to the clubhouse with the score on 23.

Abdul Salam (12) then joined captain Anand Chand (25) at the crease and hit some powerful shots until he miss-timed one and was caught at cover by Shoeib Mushtaq in the 13th over with the score on 54. Shortly thereafter, Sam Ali captured the important wicket of Chand, clean bowled.

Big hitting Syed Hussain then failed to clear the long off boundary, and Sam Ali was in the action again taking a good catch in the deep. ICC then lost a further wicket in the following over and with 5 wickets down for 79, Laguna were in the ascendancy.

Basheer Pir (19) and Ravi Naik (25 not out) showed some resistance to take the score along to 100 until Pir was bowled. With ICC running out of batsmen, a match winning performance would be required by Naik and Surrender Kumar (25).

They managed to put on a 41 run partnership until Kumar was run-out from a direct hit from a backward point by Manish Sadarangani in the 30th over with the score on 141-7. From this point onwards, Laguna made short work of the last remaining batsmen and bowled out ICC for 150 to claim victory.

This Sunday March 2 will see Patong seeking to register their first win of the season when they take on the in-form Thalang team. Play starts at 10am.