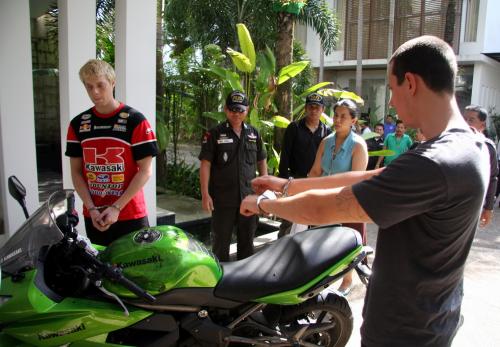 PHUKET: Officials at Phuket Provincial Court today ordered a media blackout on the ongoing trial of Swedish nationals Tommy Soderland and Sebastian Ljung amid concerns that the media was influencing witness testimonies.

The two men are on trial for the alleged murder of Maksim Schantz in Phuket in 2011(story here).

“We have seen at least one story in the media that strongly supported the suspects. That caused the victim’s family much distress, and so we are now asking that no media report on the trial until it has concluded,” said Wanna Suetortrakul, Director of Administration at Phuket Provincial Court.

Ms Wanna did not elaborate on whether the report was presented in the Thai, English or Swedish-language press.

“After the trial has concluded, the press will be free to publish details of the testimonies and the verdict, as is their right,” Ms Wanna said.

“But while the trial is ongoing, this is a decision for the judge to make, and the judge presiding in the case has decided to deny the media the privilege of publishing any story related to the Maksim Schantz case until the case is finalized,” she explained.

Among the court’s chief concerns were that news stories revealing details about the case would influence witness testimonies.

“Some witnesses can provide only part of the story, so the court will need to hear testimonies from all witnesses before it can draw any conclusions about the case,” said Mr Prachaya.

“If the media publishes a story [while the trial is underway], it might contain information that could influence the testimony of witnesses who have yet to testify,” he added.