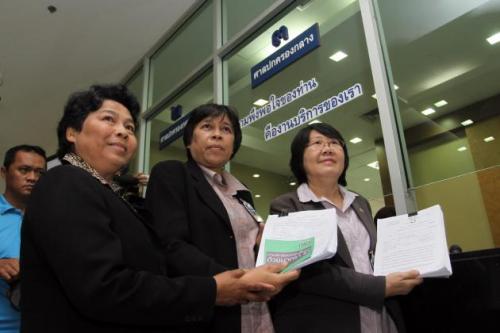 PHUKET: The foundation for Consumers yesterday filed a petition with the Central Administrative Court, seeking an order blocking a Cabinet resolution to hike the retail price of household LPG.

The hike of liquefied petroleum gas by 50 satang per kilogram is scheduled to go into effect from Sunday – the same day that the price of electricity and expressway tolls will be raised.

The planned cooking-gas hike is one of the many factors that are increasing the cost of living. The others are higher petrol prices, rising cost of utilities and more expensive food items – all at a time when the baht is getting weaker.

The global price of oil has surged 27 per cent since touching a low of $86.68 on April 17. It was recently propelled higher by the political unrest in Egypt and the threat of US intervention in Syria’s civil war, according to the Associated Press. Neither country is a major oil exporter, but traders are concerned that the violence could spread to more important oil-exporting countries or disrupt major transport routes.

The consumers’ foundation, claiming the government resolution went against the law and the Constitution, said yesterday that the price of cooking gas should be maintained at Bt18.13 per kg until a legitimate resolution ordered otherwise.

The petition said the Cabinet resolution would adversely affect individuals, was discriminatory, created an unnecessary burden on people and was the result of an illegitimate decision.

Boonyuen, a co-plaintiff, said the group would not object to the hike if it was actually necessary, but they believe the order goes against the law on several aspects and want it to be investigated.

Meanwhile, members of the Network of People as Thai Energy Owners gathered outside the PTT headquarters in Bangkok’s Chatuchak area yesterday to rally against the LPG price hike. They vowed to run a campaign from September 1-8 to gather 50,000 signatures demanding the removal of Pongsak as Energy Minister. The group has also threatened to hold a large rally on September 9 to push for his removal.

The group is also demanding the immediate dismissal of the Energy Ministry’s permanent secretary and director-general of the Department of Mineral Fuels on grounds that they failed to do their job of ensuring the maximum benefits for the people properly. They also want the government to reveal petroleum concession contracts and what it earns from energy-related businesses, as well as to get officials supervising energy matters to declare their assets.

They also want Energy Ministry officials who sit on the boards of energy-related businesses to quit the civil service due to a conflict of interest, and want the gas and oil-drilling concession system to be changed so the government can ensure the benefits are equally allocated.

Kornkasiwat Kasemsri, a leading member of the network, told a press conference that the plan to hike the cost of cooking gas from Sunday would severely affect people, despite the government’s populist policies aimed at helping low-income households.

“Drivers should use a key to lock their cars,” Pol Gen Somyos Phumphanmuang, a deputy National Police chief and director of the Car and Motorcycle Theft Suppression Center, told a press conference yesterday.

Car thieves are steadily improving their techniques to break into people’s vehicles and steal their valuables, as shown by the arrest of Wichien Bandasak, 48, in the parking lot of Macro’s Bang Phli branch in Samut Prakan on August 22.

Bang Kaew police nabbed the man while he was allegedly ransacking customers’ cars. Police found that the suspect used a modified “walkie-talkie” radio transceiver with its frequency raised to match the targeted cars’ remote control signal. With this device, remotes within 25-55 meters of a car can’t lock the doors.

This was more effective than using other marques’ remotes to interfere with the targeted cars’ remote, he added.

Dusit Suksawat, a lecturer in electrical engineering and technology at King Mongkut’s Institute of Technology Ladkrabang, said the latest gadget had two antennas that could send out two stronger signals. The devices could be bought anywhere for about Bt5,000 and modified by experts to create signals strong enough to be used for criminal purposes.

Sayamon Kanchanawisitpol said she noticed a Mini Cooper parked nearby before she left her car to go into Macro to buy something. Fifteen minutes later, she was told that her car had been broken into by a thief, but police had caught him in time.

She said the thieves might not target particular brands of cars, but were more likely to target a car used by a lone woman. She urged fellow motorists to be more careful when locking their cars so that they wouldn’t be victimized by thieves using hi-tech methods against cars’ safety systems.

As requested by locals, the 92-rai plot will now be registered as community forest. Boonchob said this operation was a proactive measure against those encroaching on forestland.

It was reported that the land in question, located at the foot of a mountain in Pak Chong district’s Tambon Wang Kratha, was also split into several 10-rai plots to be sold at between Bt1 million and Bt2 million – fetching a possible Bt30 million in total.

Although the case was separate from the recent Wang Nam Khieo forestland encroachment case involving 43 plots (1,400 rai) being investigated by police, Boonchob said the fence could be dismantled under the National Reserved Forest Act, BE 2507 (1964).