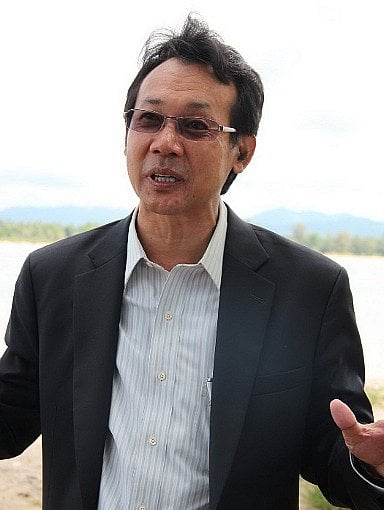 PHUKET: Efforts to build a world-class convention and exhibition center in Phuket remain mired in red tape, and a recent visit to the proposed project site by two Government advisers raises little hope that the work will begin any time soon – if ever.

The latest twist in the decades-old saga came with a visit to the proposed project site in Mai Khao yesterday by Wuttipong Chaisaeng, adviser to Deputy Prime Minister and Interior Minister Yongyuth Wichaidit, and Dr Boon Wanasin, president of the advisory committee for deputy prime ministers.

The pair said that specialists from the National Environment Board (NEB) would meet on March 16 to review the details and that Cabinet would reject the project outright if it were deemed to have adverse effects on the environment.

If funding for the 2.6 billion-baht project, to cover over 100 rai on the island’s northern tip, was approved by the Democrat-led government that fell in May.

Land acquired, project design and the public hearing process virtually complete, the project stalled when its Environmental Impact Assessment (EIA) was rejected by the Office of Natural Resources and Environmental Policy and Planning (ONEP) last year on both economic and environmental grounds.

Many suspected a political fix, especially given the fact that the project was championed by Phuket’s two Democrat Party MPs.

However, good news came in early December when the Cabinet threw the project a lifeline in the form of a two-year extension on the contract signing.

Mr Wuttipong admitted that it was “essential” for Phuket to have a large convention center to meet international demand to host large events on the island. But after inspecting the project site he professed ‘grave’ concerns.

“After inspecting the site at Mai Khao Beach [sic], I see the big problems concerning environmental-impact issues,” he said.

Specialists from NEB need to review the project in detail and determine for themselves the extent of those impacts, he said.

If the NEB finds the impacts are acceptable, the project will be fast-tracked and construction would begin soon, he said.

“If the NEB finds otherwise, we won’t allow construction,” he said.

The NEB review meeting on March 16 will come just three days before the mobile Cabinet meeting set to take place in Phuket.

In addition to his concerns about the environment, Mr Wuttipong said he thought the 140 rai of Treasury Department land might be “too big” for such a project.

Given Phuket’s many needs in terms of infrastructure and development, the land might be better suited to an alternative project that would better benefit the island’s economy, he said.

“There are some people who want the center built here, others who do not. Those opposed think the location is not appropriate because it is too far from Phuket Town. I will leave it to the NEB to review the environmental issues first; then we can discuss the location issue further,” he added.