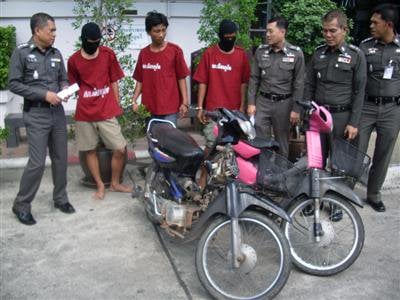 Despite the first name, the youth’s recent actions were anything but regal.

Mr King was arrested at 1:30am Monday as he was withdrawing cash from a Thanachart Bank ATM in Tambon Srisoonthorn. The back of the ATM card bore the signature of the card’s real owner, who had earlier reported it stolen.

The suspect confessed to acquiring the card in a robbery carried out with a 16-year-old accomplice identified only by the alias ‘Jack’, because he is a minor.

Jack, a resident of Phuket, was presented to the police wearing a balaclava.

When picked up by police, a check of the motorbike Jack was riding revealed that it had been reported stolen on December 10.

Jack also confessed to several other robberies, including one on Soi Panieng in Rasada in November and two others on the bypass road after that.

Two other young motorbike thieves, aged 14 and 16, were also presented in balaclavas.

Both were arrested for stealing motorbikes in Rasada on Monday.