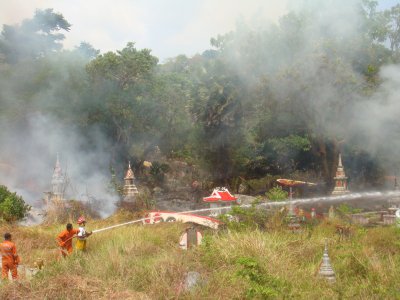 PHUKET TOWN: Firefighters used almost 9,000 liters of water to put out flames that raged in the Chinese cemetery on Rang Hill in Phuket Town today.

Ten firefighters in three trucks rushed to the scene after the fire started at about 1pm. It took them around half an hour to bring the inferno under control.

Arthit Phromsiri, head of the Phuket Fire and Rescue Department team that attended the scene, said the fires were probably started by men hired to clear the cemetery of vegetation in advance of the Chinese Qingming Festival.

Instead of clearing grass by hand, they just set it on fire, he said.

During the Qingming Festival, which takes place annually around April 5, Chinese are expected to pay respects to their ancestors at grave sites. Cemeteries are cleared to provide worshipers with access to the graves.

A local resident said there are fires at the same site this time every year, but today’s blaze was larger and more dangerous than usual.

Firefighters were twice called to the cemetery one week ago, when fires extinguished in the afternoon reignited at night.