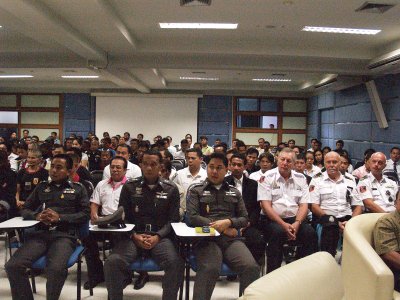 PHUKET: Fearing that political groups may try to cause disruptions in Phuket during the red shirt demonstrations in Bangkok, the police are enlisting members of the public as their roving eyes and ears.

Through a project called ‘News for Security’, the police are asking citizens to spot suspicious packages and unusual behavior, and to report it to the authorities.

A bomb disposal team was present to explain how to deal with suspicious packages.

Maj Gen Pekad said the police did not have enough manpower to patrol every corner of the island themselves.

“We need cooperation from local volunteers,” he said. “But I don’t believe the red shirts will do anything to damage Phuket tourism. We all remember how bad things got after the airport closures.”

Police Region 8 Commissioner Pitak Jarusombat, who is driving the project, said, “Phuket is considered a world class tourist destination, so we’re focusing on security for both Thais and foreigners.”

“If Phuket residents can help keep an eye on unusual situations for the police, it will be very useful to us,” he said.

Maj Gen Pitak said the police did not have the right to stop the red shirts from holding gatherings.

“We’ll focus on checking for weapons instead,” he said.

Tourists to be routed to Phuket