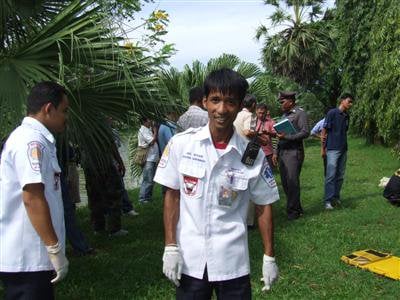 The deceased, identified as 32-year-old Phuket City resident Amnard Rodpradit, was wanted by police in connection with a recent spate of robberies of Buddhist images from stores and homes around Phuket.

Police told the Gazette that Mr Amnard and two accomplices entered a store on Chao Fah East Road, opposite the Rama IX Park, just before 1pm.

After unsuccessfully trying to sell off stolen images of the revered Phuket monk Luang Phor Chaem to the shop owner, the trio exited the store.

When they did, police were waiting for them.

The gang then fled across the busy Chao Fah East Road into the park, where a shootout ensued.

Mr Amnard was shot twice in the chest and fell into a lake at the edge of the park.

By 2pm, around 200 hundred onlookers had gathered to the spot where his body was dragged from the lake.

One of his accomplices, identified as 32-year-old Apichart Thammathip from Nakhon Sri Thammarat, was also arrested.

A third man escaped on foot and remains at large.

No police officers were injured in the shoot out.